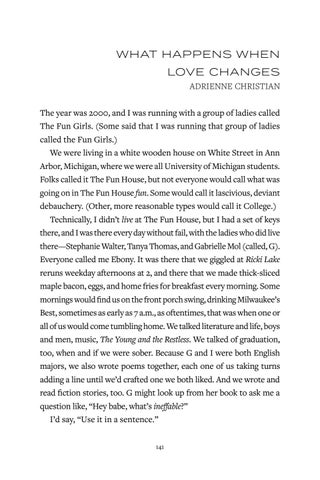 What Happens When Love Changes ADRIENNE CHRISTIAN The year was 2000, and I was running with a group of ladies called The Fun Girls. (Some said that I was running that group of ladies called the Fun Girls.) We were living in a white wooden house on White Street in Ann Arbor, Michigan, where we were all University of Michigan students. Folks called it The Fun House, but not everyone would call what was going on in The Fun House fun. Some would call it lascivious, deviant debauchery. (Other, more reasonable types would call it College.) Technically, I didn’t live at The Fun House, but I had a set of keys there, and I was there every day without fail, with the ladies who did live there—Stephanie Walter, Tanya Thomas, and Gabrielle Mol (called, G). Everyone called me Ebony. It was there that we giggled at Ricki Lake reruns weekday afternoons at 2, and there that we made thick-sliced maple bacon, eggs, and home fries for breakfast every morning. Some mornings would find us on the front porch swing, drinking Milwaukee’s Best, sometimes as early as 7 a.m., as oftentimes, that was when one or all of us would come tumbling home. We talked literature and life, boys and men, music, The Young and the Restless. We talked of graduation, too, when and if we were sober. Because G and I were both English majors, we also wrote poems together, each one of us taking turns adding a line until we’d crafted one we both liked. And we wrote and read fiction stories, too. G might look up from her book to ask me a question like, “Hey babe, what’s ineffable?” I’d say, “Use it in a sentence.” 141