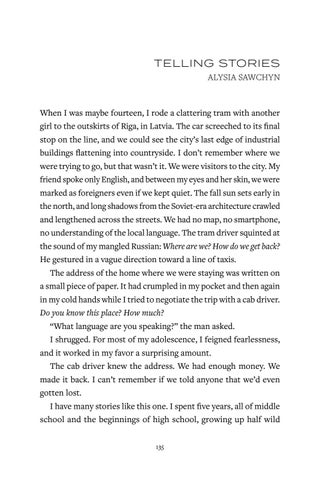 When I was maybe fourteen, I rode a clattering tram with another girl to the outskirts of Riga, in Latvia. The car screeched to its final stop on the line, and we could see the city’s last edge of industrial buildings flattening into countryside. I don’t remember where we were trying to go, but that wasn’t it. We were visitors to the city. My friend spoke only English, and between my eyes and her skin, we were marked as foreigners even if we kept quiet. The fall sun sets early in the north, and long shadows from the Soviet-era architecture crawled and lengthened across the streets. We had no map, no smartphone, no understanding of the local language. The tram driver squinted at the sound of my mangled Russian: Where are we? How do we get back? He gestured in a vague direction toward a line of taxis. The address of the home where we were staying was written on a small piece of paper. It had crumpled in my pocket and then again in my cold hands while I tried to negotiate the trip with a cab driver. Do you know this place? How much? “What language are you speaking?” the man asked. I shrugged. For most of my adolescence, I feigned fearlessness, and it worked in my favor a surprising amount. The cab driver knew the address. We had enough money. We made it back. I can’t remember if we told anyone that we’d even gotten lost. I have many stories like this one. I spent five years, all of middle school and the beginnings of high school, growing up half wild 135