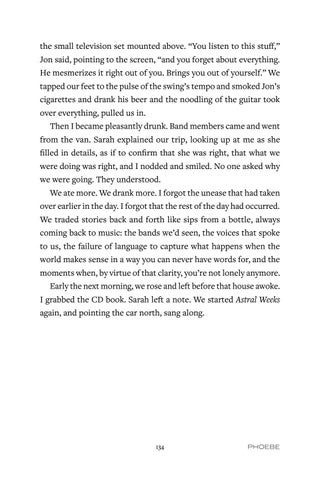 the small television set mounted above. “You listen to this stuff,” Jon said, pointing to the screen, “and you forget about everything. He mesmerizes it right out of you. Brings you out of yourself.” We tapped our feet to the pulse of the swing’s tempo and smoked Jon’s cigarettes and drank his beer and the noodling of the guitar took over everything, pulled us in. Then I became pleasantly drunk. Band members came and went from the van. Sarah explained our trip, looking up at me as she filled in details, as if to confirm that she was right, that what we were doing was right, and I nodded and smiled. No one asked why we were going. They understood. We ate more. We drank more. I forgot the unease that had taken over earlier in the day. I forgot that the rest of the day had occurred. We traded stories back and forth like sips from a bottle, always coming back to music: the bands we’d seen, the voices that spoke to us, the failure of language to capture what happens when the world makes sense in a way you can never have words for, and the moments when, by virtue of that clarity, you’re not lonely anymore. Early the next morning, we rose and left before that house awoke. I grabbed the CD book. Sarah left a note. We started Astral Weeks again, and pointing the car north, sang along.