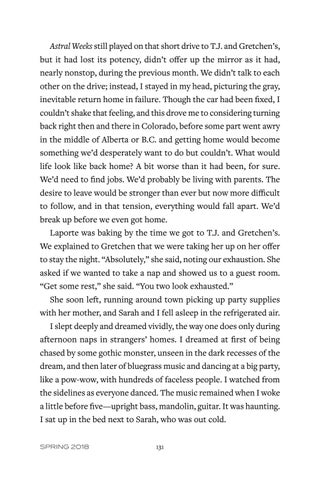 Astral Weeks still played on that short drive to T.J. and Gretchen’s, but it had lost its potency, didn’t offer up the mirror as it had, nearly nonstop, during the previous month. We didn’t talk to each other on the drive; instead, I stayed in my head, picturing the gray, inevitable return home in failure. Though the car had been fixed, I couldn’t shake that feeling, and this drove me to considering turning back right then and there in Colorado, before some part went awry in the middle of Alberta or B.C. and getting home would become something we’d desperately want to do but couldn’t. What would life look like back home? A bit worse than it had been, for sure. We’d need to find jobs. We’d probably be living with parents. The desire to leave would be stronger than ever but now more difficult to follow, and in that tension, everything would fall apart. We’d break up before we even got home. Laporte was baking by the time we got to T.J. and Gretchen’s. We explained to Gretchen that we were taking her up on her offer to stay the night. “Absolutely,” she said, noting our exhaustion. She asked if we wanted to take a nap and showed us to a guest room. “Get some rest,” she said. “You two look exhausted.” She soon left, running around town picking up party supplies with her mother, and Sarah and I fell asleep in the refrigerated air. I slept deeply and dreamed vividly, the way one does only during afternoon naps in strangers’ homes. I dreamed at first of being chased by some gothic monster, unseen in the dark recesses of the dream, and then later of bluegrass music and dancing at a big party, like a pow-wow, with hundreds of faceless people. I watched from the sidelines as everyone danced. The music remained when I woke a little before five—upright bass, mandolin, guitar. It was haunting. I sat up in the bed next to Sarah, who was out cold. SPRING 2018