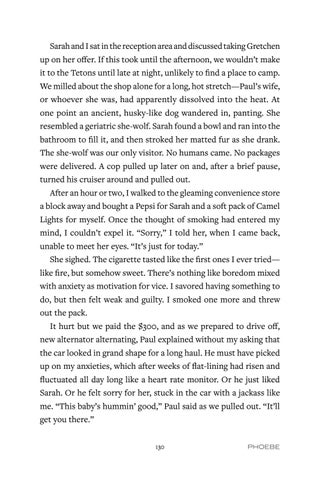 Sarah and I sat in the reception area and discussed taking Gretchen up on her offer. If this took until the afternoon, we wouldn’t make it to the Tetons until late at night, unlikely to find a place to camp. We milled about the shop alone for a long, hot stretch—Paul’s wife, or whoever she was, had apparently dissolved into the heat. At one point an ancient, husky-like dog wandered in, panting. She resembled a geriatric she-wolf. Sarah found a bowl and ran into the bathroom to fill it, and then stroked her matted fur as she drank. The she-wolf was our only visitor. No humans came. No packages were delivered. A cop pulled up later on and, after a brief pause, turned his cruiser around and pulled out. After an hour or two, I walked to the gleaming convenience store a block away and bought a Pepsi for Sarah and a soft pack of Camel Lights for myself. Once the thought of smoking had entered my mind, I couldn’t expel it. “Sorry,” I told her, when I came back, unable to meet her eyes. “It’s just for today.” She sighed. The cigarette tasted like the first ones I ever tried— like fire, but somehow sweet. There’s nothing like boredom mixed with anxiety as motivation for vice. I savored having something to do, but then felt weak and guilty. I smoked one more and threw out the pack. It hurt but we paid the $300, and as we prepared to drive off, new alternator alternating, Paul explained without my asking that the car looked in grand shape for a long haul. He must have picked up on my anxieties, which after weeks of flat-lining had risen and fluctuated all day long like a heart rate monitor. Or he just liked Sarah. Or he felt sorry for her, stuck in the car with a jackass like me. “This baby’s hummin’ good,” Paul said as we pulled out. “It’ll get you there.” 130