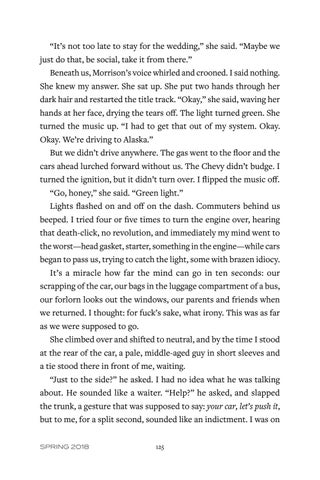 “It’s not too late to stay for the wedding,” she said. “Maybe we just do that, be social, take it from there.” Beneath us, Morrison’s voice whirled and crooned. I said nothing. She knew my answer. She sat up. She put two hands through her dark hair and restarted the title track. “Okay,” she said, waving her hands at her face, drying the tears off. The light turned green. She turned the music up. “I had to get that out of my system. Okay. Okay. We’re driving to Alaska.” But we didn’t drive anywhere. The gas went to the floor and the cars ahead lurched forward without us. The Chevy didn’t budge. I turned the ignition, but it didn’t turn over. I flipped the music off. “Go, honey,” she said. “Green light.” Lights flashed on and off on the dash. Commuters behind us beeped. I tried four or five times to turn the engine over, hearing that death-click, no revolution, and immediately my mind went to the worst—head gasket, starter, something in the engine—while cars began to pass us, trying to catch the light, some with brazen idiocy. It’s a miracle how far the mind can go in ten seconds: our scrapping of the car, our bags in the luggage compartment of a bus, our forlorn looks out the windows, our parents and friends when we returned. I thought: for fuck’s sake, what irony. This was as far as we were supposed to go. She climbed over and shifted to neutral, and by the time I stood at the rear of the car, a pale, middle-aged guy in short sleeves and a tie stood there in front of me, waiting. “Just to the side?” he asked. I had no idea what he was talking about. He sounded like a waiter. “Help?” he asked, and slapped the trunk, a gesture that was supposed to say: your car, let’s push it, but to me, for a split second, sounded like an indictment. I was on SPRING 2018