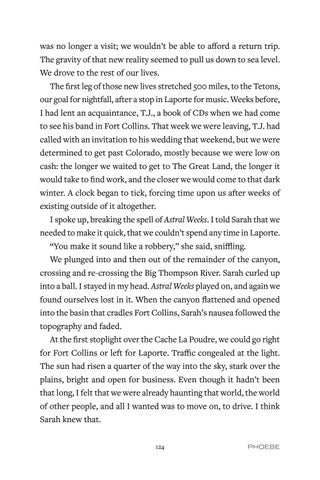 was no longer a visit; we wouldn’t be able to afford a return trip. The gravity of that new reality seemed to pull us down to sea level. We drove to the rest of our lives. The first leg of those new lives stretched 500 miles, to the Tetons, our goal for nightfall, after a stop in Laporte for music. Weeks before, I had lent an acquaintance, T.J., a book of CDs when we had come to see his band in Fort Collins. That week we were leaving, T.J. had called with an invitation to his wedding that weekend, but we were determined to get past Colorado, mostly because we were low on cash: the longer we waited to get to The Great Land, the longer it would take to find work, and the closer we would come to that dark winter. A clock began to tick, forcing time upon us after weeks of existing outside of it altogether. I spoke up, breaking the spell of Astral Weeks. I told Sarah that we needed to make it quick, that we couldn’t spend any time in Laporte. “You make it sound like a robbery,” she said, sniffling. We plunged into and then out of the remainder of the canyon, crossing and re-crossing the Big Thompson River. Sarah curled up into a ball. I stayed in my head. Astral Weeks played on, and again we found ourselves lost in it. When the canyon flattened and opened into the basin that cradles Fort Collins, Sarah’s nausea followed the topography and faded. At the first stoplight over the Cache La Poudre, we could go right for Fort Collins or left for Laporte. Traffic congealed at the light. The sun had risen a quarter of the way into the sky, stark over the plains, bright and open for business. Even though it hadn’t been that long, I felt that we were already haunting that world, the world of other people, and all I wanted was to move on, to drive. I think Sarah knew that. 124