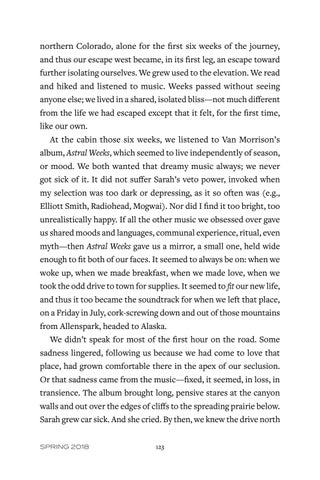 northern Colorado, alone for the first six weeks of the journey, and thus our escape west became, in its first leg, an escape toward further isolating ourselves. We grew used to the elevation. We read and hiked and listened to music. Weeks passed without seeing anyone else; we lived in a shared, isolated bliss—not much different from the life we had escaped except that it felt, for the first time, like our own. At the cabin those six weeks, we listened to Van Morrison’s album, Astral Weeks, which seemed to live independently of season, or mood. We both wanted that dreamy music always; we never got sick of it. It did not suffer Sarah’s veto power, invoked when my selection was too dark or depressing, as it so often was (e.g., Elliott Smith, Radiohead, Mogwai). Nor did I find it too bright, too unrealistically happy. If all the other music we obsessed over gave us shared moods and languages, communal experience, ritual, even myth—then Astral Weeks gave us a mirror, a small one, held wide enough to fit both of our faces. It seemed to always be on: when we woke up, when we made breakfast, when we made love, when we took the odd drive to town for supplies. It seemed to fit our new life, and thus it too became the soundtrack for when we left that place, on a Friday in July, cork-screwing down and out of those mountains from Allenspark, headed to Alaska. We didn’t speak for most of the first hour on the road. Some sadness lingered, following us because we had come to love that place, had grown comfortable there in the apex of our seclusion. Or that sadness came from the music—fixed, it seemed, in loss, in transience. The album brought long, pensive stares at the canyon walls and out over the edges of cliffs to the spreading prairie below. Sarah grew car sick. And she cried. By then, we knew the drive north SPRING 2018