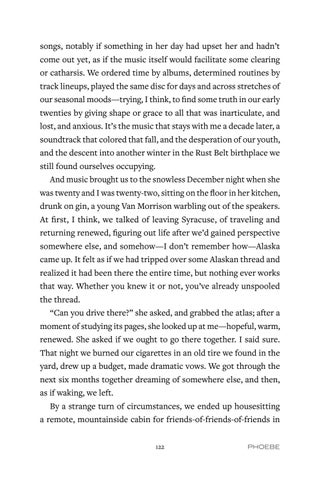 songs, notably if something in her day had upset her and hadn’t come out yet, as if the music itself would facilitate some clearing or catharsis. We ordered time by albums, determined routines by track lineups, played the same disc for days and across stretches of our seasonal moods—trying, I think, to find some truth in our early twenties by giving shape or grace to all that was inarticulate, and lost, and anxious. It’s the music that stays with me a decade later, a soundtrack that colored that fall, and the desperation of our youth, and the descent into another winter in the Rust Belt birthplace we still found ourselves occupying. And music brought us to the snowless December night when she was twenty and I was twenty-two, sitting on the floor in her kitchen, drunk on gin, a young Van Morrison warbling out of the speakers. At first, I think, we talked of leaving Syracuse, of traveling and returning renewed, figuring out life after we’d gained perspective somewhere else, and somehow—I don’t remember how—Alaska came up. It felt as if we had tripped over some Alaskan thread and realized it had been there the entire time, but nothing ever works that way. Whether you knew it or not, you’ve already unspooled the thread. “Can you drive there?” she asked, and grabbed the atlas; after a moment of studying its pages, she looked up at me—hopeful, warm, renewed. She asked if we ought to go there together. I said sure. That night we burned our cigarettes in an old tire we found in the yard, drew up a budget, made dramatic vows. We got through the next six months together dreaming of somewhere else, and then, as if waking, we left. By a strange turn of circumstances, we ended up housesitting a remote, mountainside cabin for friends-of-friends-of-friends in 122