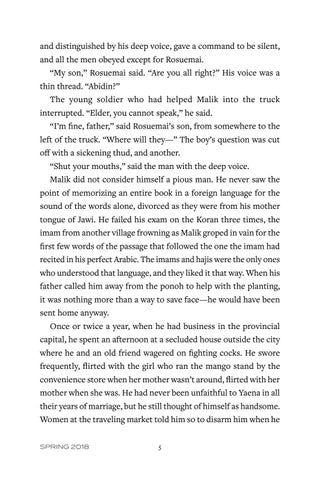 and distinguished by his deep voice, gave a command to be silent, and all the men obeyed except for Rosuemai. “My son,” Rosuemai said. “Are you all right?” His voice was a thin thread. “Abidin?” The young soldier who had helped Malik into the truck interrupted. “Elder, you cannot speak,” he said. “I’m fine, father,” said Rosuemai’s son, from somewhere to the left of the truck. “Where will they—” The boy’s question was cut off with a sickening thud, and another. “Shut your mouths,” said the man with the deep voice. Malik did not consider himself a pious man. He never saw the point of memorizing an entire book in a foreign language for the sound of the words alone, divorced as they were from his mother tongue of Jawi. He failed his exam on the Koran three times, the imam from another village frowning as Malik groped in vain for the first few words of the passage that followed the one the imam had recited in his perfect Arabic. The imams and hajis were the only ones who understood that language, and they liked it that way. When his father called him away from the ponoh to help with the planting, it was nothing more than a way to save face—he would have been sent home anyway. Once or twice a year, when he had business in the provincial capital, he spent an afternoon at a secluded house outside the city where he and an old friend wagered on fighting cocks. He swore frequently, flirted with the girl who ran the mango stand by the convenience store when her mother wasn’t around, flirted with her mother when she was. He had never been unfaithful to Yaena in all their years of marriage, but he still thought of himself as handsome. Women at the traveling market told him so to disarm him when he SPRING 2018