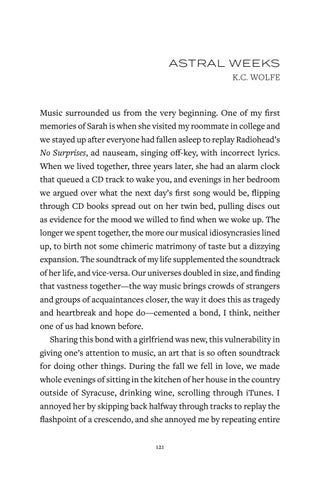 Music surrounded us from the very beginning. One of my first memories of Sarah is when she visited my roommate in college and we stayed up after everyone had fallen asleep to replay Radiohead’s No Surprises, ad nauseam, singing off-key, with incorrect lyrics. When we lived together, three years later, she had an alarm clock that queued a CD track to wake you, and evenings in her bedroom we argued over what the next day’s first song would be, flipping through CD books spread out on her twin bed, pulling discs out as evidence for the mood we willed to find when we woke up. The longer we spent together, the more our musical idiosyncrasies lined up, to birth not some chimeric matrimony of taste but a dizzying expansion. The soundtrack of my life supplemented the soundtrack of her life, and vice-versa. Our universes doubled in size, and finding that vastness together—the way music brings crowds of strangers and groups of acquaintances closer, the way it does this as tragedy and heartbreak and hope do—cemented a bond, I think, neither one of us had known before. Sharing this bond with a girlfriend was new, this vulnerability in giving one’s attention to music, an art that is so often soundtrack for doing other things. During the fall we fell in love, we made whole evenings of sitting in the kitchen of her house in the country outside of Syracuse, drinking wine, scrolling through iTunes. I annoyed her by skipping back halfway through tracks to replay the flashpoint of a crescendo, and she annoyed me by repeating entire 121