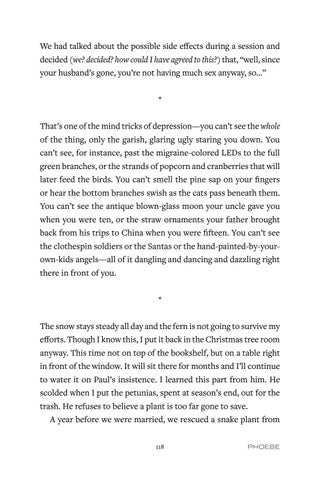 We had talked about the possible side effects during a session and decided (we? decided? how could I have agreed to this?) that, “well, since your husband’s gone, you’re not having much sex anyway, so…” * That’s one of the mind tricks of depression—you can’t see the whole of the thing, only the garish, glaring ugly staring you down. You can’t see, for instance, past the migraine-colored LEDs to the full green branches, or the strands of popcorn and cranberries that will later feed the birds. You can’t smell the pine sap on your fingers or hear the bottom branches swish as the cats pass beneath them. You can’t see the antique blown-glass moon your uncle gave you when you were ten, or the straw ornaments your father brought back from his trips to China when you were fifteen. You can’t see the clothespin soldiers or the Santas or the hand-painted-by-yourown-kids angels—all of it dangling and dancing and dazzling right there in front of you. * The snow stays steady all day and the fern is not going to survive my efforts. Though I know this, I put it back in the Christmas tree room anyway. This time not on top of the bookshelf, but on a table right in front of the window. It will sit there for months and I’ll continue to water it on Paul’s insistence. I learned this part from him. He scolded when I put the petunias, spent at season’s end, out for the trash. He refuses to believe a plant is too far gone to save. A year before we were married, we rescued a snake plant from 118