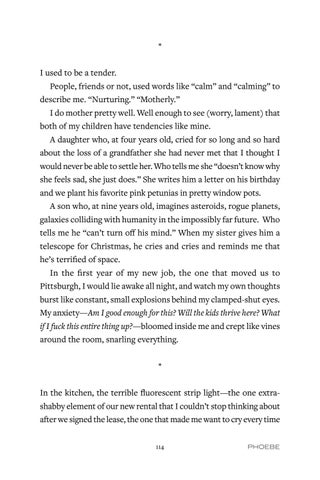 * I used to be a tender. People, friends or not, used words like “calm” and “calming” to describe me. “Nurturing.” “Motherly.” I do mother pretty well. Well enough to see (worry, lament) that both of my children have tendencies like mine. A daughter who, at four years old, cried for so long and so hard about the loss of a grandfather she had never met that I thought I would never be able to settle her. Who tells me she “doesn’t know why she feels sad, she just does.” She writes him a letter on his birthday and we plant his favorite pink petunias in pretty window pots. A son who, at nine years old, imagines asteroids, rogue planets, galaxies colliding with humanity in the impossibly far future. Who tells me he “can’t turn off his mind.” When my sister gives him a telescope for Christmas, he cries and cries and reminds me that he’s terrified of space. In the first year of my new job, the one that moved us to Pittsburgh, I would lie awake all night, and watch my own thoughts burst like constant, small explosions behind my clamped-shut eyes. My anxiety—Am I good enough for this? Will the kids thrive here? What if I fuck this entire thing up?—bloomed inside me and crept like vines around the room, snarling everything. * In the kitchen, the terrible fluorescent strip light—the one extrashabby element of our new rental that I couldn’t stop thinking about after we signed the lease, the one that made me want to cry every time 114