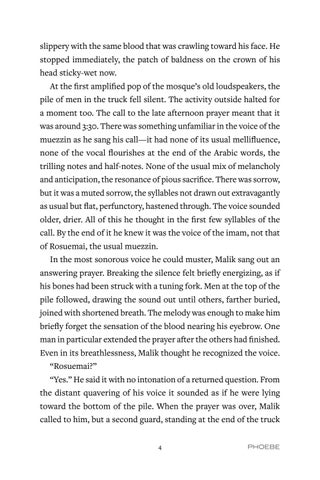 slippery with the same blood that was crawling toward his face. He stopped immediately, the patch of baldness on the crown of his head sticky-wet now. At the first amplified pop of the mosque’s old loudspeakers, the pile of men in the truck fell silent. The activity outside halted for a moment too. The call to the late afternoon prayer meant that it was around 3:30. There was something unfamiliar in the voice of the muezzin as he sang his call—it had none of its usual mellifluence, none of the vocal flourishes at the end of the Arabic words, the trilling notes and half-notes. None of the usual mix of melancholy and anticipation, the resonance of pious sacrifice. There was sorrow, but it was a muted sorrow, the syllables not drawn out extravagantly as usual but flat, perfunctory, hastened through. The voice sounded older, drier. All of this he thought in the first few syllables of the call. By the end of it he knew it was the voice of the imam, not that of Rosuemai, the usual muezzin. In the most sonorous voice he could muster, Malik sang out an answering prayer. Breaking the silence felt briefly energizing, as if his bones had been struck with a tuning fork. Men at the top of the pile followed, drawing the sound out until others, farther buried, joined with shortened breath. The melody was enough to make him briefly forget the sensation of the blood nearing his eyebrow. One man in particular extended the prayer after the others had finished. Even in its breathlessness, Malik thought he recognized the voice. “Rosuemai?” “Yes.” He said it with no intonation of a returned question. From the distant quavering of his voice it sounded as if he were lying toward the bottom of the pile. When the prayer was over, Malik called to him, but a second guard, standing at the end of the truck 4