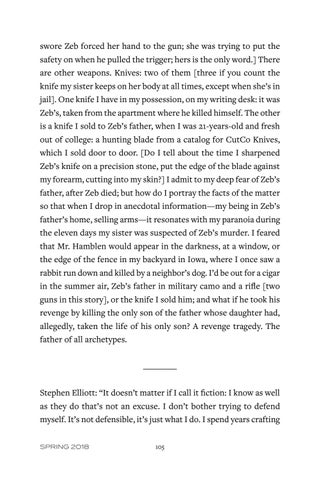 swore Zeb forced her hand to the gun; she was trying to put the safety on when he pulled the trigger; hers is the only word.] There are other weapons. Knives: two of them [three if you count the knife my sister keeps on her body at all times, except when she’s in jail]. One knife I have in my possession, on my writing desk: it was Zeb’s, taken from the apartment where he killed himself. The other is a knife I sold to Zeb’s father, when I was 21-years-old and fresh out of college: a hunting blade from a catalog for CutCo Knives, which I sold door to door. [Do I tell about the time I sharpened Zeb’s knife on a precision stone, put the edge of the blade against my forearm, cutting into my skin?] I admit to my deep fear of Zeb’s father, after Zeb died; but how do I portray the facts of the matter so that when I drop in anecdotal information—my being in Zeb’s father’s home, selling arms—it resonates with my paranoia during the eleven days my sister was suspected of Zeb’s murder. I feared that Mr. Hamblen would appear in the darkness, at a window, or the edge of the fence in my backyard in Iowa, where I once saw a rabbit run down and killed by a neighbor’s dog. I’d be out for a cigar in the summer air, Zeb’s father in military camo and a rifle [two guns in this story], or the knife I sold him; and what if he took his revenge by killing the only son of the father whose daughter had, allegedly, taken the life of his only son? A revenge tragedy. The father of all archetypes. ________ Stephen Elliott: “It doesn’t matter if I call it fiction: I know as well as they do that’s not an excuse. I don’t bother trying to defend myself. It’s not defensible, it’s just what I do. I spend years crafting SPRING 2018