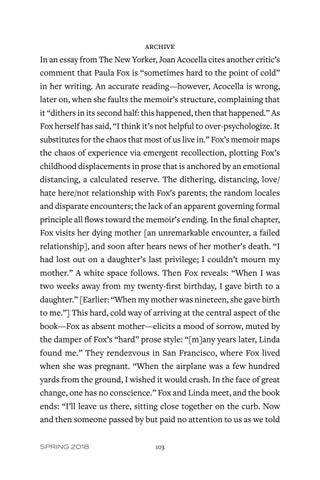 ARCHIVE In an essay from The New Yorker, Joan Acocella cites another critic’s comment that Paula Fox is “sometimes hard to the point of cold” in her writing. An accurate reading—however, Acocella is wrong, later on, when she faults the memoir’s structure, complaining that it “dithers in its second half: this happened, then that happened.” As Fox herself has said, “I think it’s not helpful to over-psychologize. It substitutes for the chaos that most of us live in.” Fox’s memoir maps the chaos of experience via emergent recollection, plotting Fox’s childhood displacements in prose that is anchored by an emotional distancing, a calculated reserve. The dithering, distancing, love/ hate here/not relationship with Fox’s parents; the random locales and disparate encounters; the lack of an apparent governing formal principle all flows toward the memoir’s ending. In the final chapter, Fox visits her dying mother [an unremarkable encounter, a failed relationship], and soon after hears news of her mother’s death. “I had lost out on a daughter’s last privilege; I couldn’t mourn my mother.” A white space follows. Then Fox reveals: “When I was two weeks away from my twenty-first birthday, I gave birth to a daughter.” [Earlier: “When my mother was nineteen, she gave birth to me.”] This hard, cold way of arriving at the central aspect of the book—Fox as absent mother—elicits a mood of sorrow, muted by the damper of Fox’s “hard” prose style: “[m]any years later, Linda found me.” They rendezvous in San Francisco, where Fox lived when she was pregnant. “When the airplane was a few hundred yards from the ground, I wished it would crash. In the face of great change, one has no conscience.” Fox and Linda meet, and the book ends: “I’ll leave us there, sitting close together on the curb. Now and then someone passed by but paid no attention to us as we told SPRING 2018