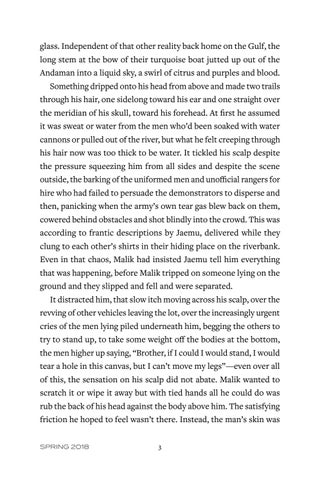 glass. Independent of that other reality back home on the Gulf, the long stem at the bow of their turquoise boat jutted up out of the Andaman into a liquid sky, a swirl of citrus and purples and blood. Something dripped onto his head from above and made two trails through his hair, one sidelong toward his ear and one straight over the meridian of his skull, toward his forehead. At first he assumed it was sweat or water from the men who’d been soaked with water cannons or pulled out of the river, but what he felt creeping through his hair now was too thick to be water. It tickled his scalp despite the pressure squeezing him from all sides and despite the scene outside, the barking of the uniformed men and unofficial rangers for hire who had failed to persuade the demonstrators to disperse and then, panicking when the army’s own tear gas blew back on them, cowered behind obstacles and shot blindly into the crowd. This was according to frantic descriptions by Jaemu, delivered while they clung to each other’s shirts in their hiding place on the riverbank. Even in that chaos, Malik had insisted Jaemu tell him everything that was happening, before Malik tripped on someone lying on the ground and they slipped and fell and were separated. It distracted him, that slow itch moving across his scalp, over the revving of other vehicles leaving the lot, over the increasingly urgent cries of the men lying piled underneath him, begging the others to try to stand up, to take some weight off the bodies at the bottom, the men higher up saying, “Brother, if I could I would stand, I would tear a hole in this canvas, but I can’t move my legs”—even over all of this, the sensation on his scalp did not abate. Malik wanted to scratch it or wipe it away but with tied hands all he could do was rub the back of his head against the body above him. The satisfying friction he hoped to feel wasn’t there. Instead, the man’s skin was SPRING 2018