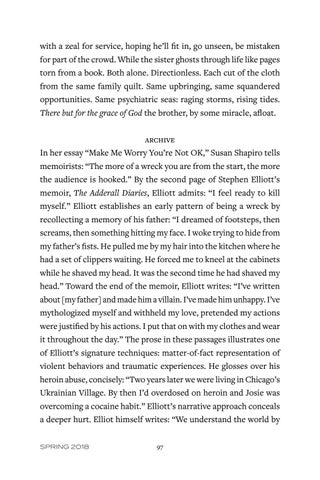 with a zeal for service, hoping he’ll fit in, go unseen, be mistaken for part of the crowd. While the sister ghosts through life like pages torn from a book. Both alone. Directionless. Each cut of the cloth from the same family quilt. Same upbringing, same squandered opportunities. Same psychiatric seas: raging storms, rising tides. There but for the grace of God the brother, by some miracle, afloat. ARCHIVE In her essay “Make Me Worry You’re Not OK,” Susan Shapiro tells memoirists: “The more of a wreck you are from the start, the more the audience is hooked.” By the second page of Stephen Elliott’s memoir, The Adderall Diaries, Elliott admits: “I feel ready to kill myself.” Elliott establishes an early pattern of being a wreck by recollecting a memory of his father: “I dreamed of footsteps, then screams, then something hitting my face. I woke trying to hide from my father’s fists. He pulled me by my hair into the kitchen where he had a set of clippers waiting. He forced me to kneel at the cabinets while he shaved my head. It was the second time he had shaved my head.” Toward the end of the memoir, Elliott writes: “I’ve written about [my father] and made him a villain. I’ve made him unhappy. I’ve mythologized myself and withheld my love, pretended my actions were justified by his actions. I put that on with my clothes and wear it throughout the day.” The prose in these passages illustrates one of Elliott’s signature techniques: matter-of-fact representation of violent behaviors and traumatic experiences. He glosses over his heroin abuse, concisely: “Two years later we were living in Chicago’s Ukrainian Village. By then I’d overdosed on heroin and Josie was overcoming a cocaine habit.” Elliott’s narrative approach conceals a deeper hurt. Elliot himself writes: “We understand the world by SPRING 2018