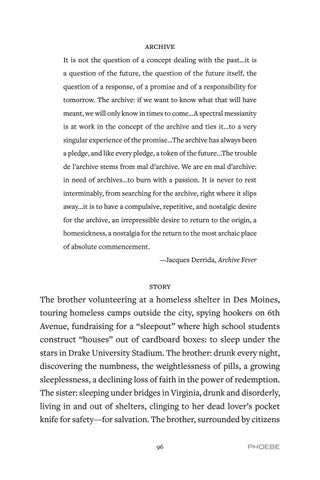 ARCHIVE It is not the question of a concept dealing with the past...it is a question of the future, the question of the future itself, the question of a response, of a promise and of a responsibility for tomorrow. The archive: if we want to know what that will have meant, we will only know in times to come...A spectral messianity is at work in the concept of the archive and ties it...to a very singular experience of the promise...The archive has always been a pledge, and like every pledge, a token of the future...The trouble de l’archive stems from mal d’archive. We are en mal d’archive: in need of archives...to burn with a passion. It is never to rest interminably, from searching for the archive, right where it slips away...it is to have a compulsive, repetitive, and nostalgic desire for the archive, an irrepressible desire to return to the origin, a homesickness, a nostalgia for the return to the most archaic place of absolute commencement. —Jacques Derrida, Archive Fever

STORY The brother volunteering at a homeless shelter in Des Moines, touring homeless camps outside the city, spying hookers on 6th Avenue, fundraising for a “sleepout” where high school students construct “houses” out of cardboard boxes: to sleep under the stars in Drake University Stadium. The brother: drunk every night, discovering the numbness, the weightlessness of pills, a growing sleeplessness, a declining loss of faith in the power of redemption. The sister: sleeping under bridges in Virginia, drunk and disorderly, living in and out of shelters, clinging to her dead lover’s pocket knife for safety—for salvation. The brother, surrounded by citizens 96