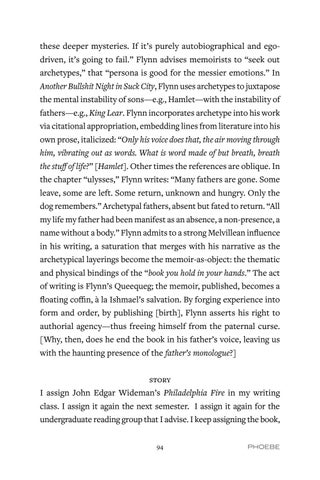 these deeper mysteries. If it’s purely autobiographical and egodriven, it’s going to fail.” Flynn advises memoirists to “seek out archetypes,” that “persona is good for the messier emotions.” In Another Bullshit Night in Suck City, Flynn uses archetypes to juxtapose the mental instability of sons—e.g., Hamlet—with the instability of fathers—e.g., King Lear. Flynn incorporates archetype into his work via citational appropriation, embedding lines from literature into his own prose, italicized: “Only his voice does that, the air moving through him, vibrating out as words. What is word made of but breath, breath the stuff of life?” [Hamlet]. Other times the references are oblique. In the chapter “ulysses,” Flynn writes: “Many fathers are gone. Some leave, some are left. Some return, unknown and hungry. Only the dog remembers.” Archetypal fathers, absent but fated to return. “All my life my father had been manifest as an absence, a non-presence, a name without a body.” Flynn admits to a strong Melvillean influence in his writing, a saturation that merges with his narrative as the archetypical layerings become the memoir-as-object: the thematic and physical bindings of the “book you hold in your hands.” The act of writing is Flynn’s Queequeg; the memoir, published, becomes a floating coffin, à la Ishmael’s salvation. By forging experience into form and order, by publishing [birth], Flynn asserts his right to authorial agency—thus freeing himself from the paternal curse. [Why, then, does he end the book in his father’s voice, leaving us with the haunting presence of the father’s monologue?] STORY I assign John Edgar Wideman’s Philadelphia Fire in my writing class. I assign it again the next semester. I assign it again for the undergraduate reading group that I advise. I keep assigning the book, 94