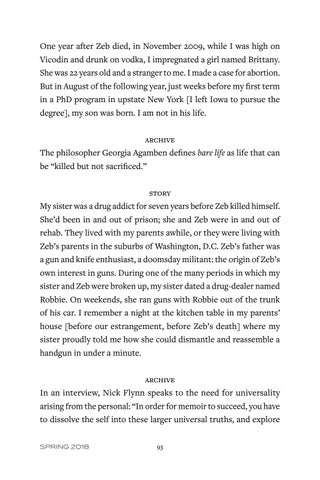 One year after Zeb died, in November 2009, while I was high on Vicodin and drunk on vodka, I impregnated a girl named Brittany. She was 22 years old and a stranger to me. I made a case for abortion. But in August of the following year, just weeks before my first term in a PhD program in upstate New York [I left Iowa to pursue the degree], my son was born. I am not in his life. ARCHIVE The philosopher Georgia Agamben defines bare life as life that can be “killed but not sacrificed.” STORY My sister was a drug addict for seven years before Zeb killed himself. She’d been in and out of prison; she and Zeb were in and out of rehab. They lived with my parents awhile, or they were living with Zeb’s parents in the suburbs of Washington, D.C. Zeb’s father was a gun and knife enthusiast, a doomsday militant: the origin of Zeb’s own interest in guns. During one of the many periods in which my sister and Zeb were broken up, my sister dated a drug-dealer named Robbie. On weekends, she ran guns with Robbie out of the trunk of his car. I remember a night at the kitchen table in my parents’ house [before our estrangement, before Zeb’s death] where my sister proudly told me how she could dismantle and reassemble a handgun in under a minute. ARCHIVE In an interview, Nick Flynn speaks to the need for universality arising from the personal: “In order for memoir to succeed, you have to dissolve the self into these larger universal truths, and explore SPRING 2018