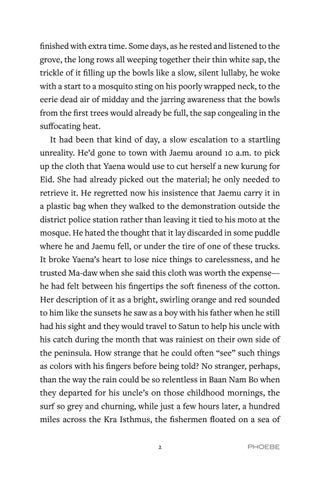 finished with extra time. Some days, as he rested and listened to the grove, the long rows all weeping together their thin white sap, the trickle of it filling up the bowls like a slow, silent lullaby, he woke with a start to a mosquito sting on his poorly wrapped neck, to the eerie dead air of midday and the jarring awareness that the bowls from the first trees would already be full, the sap congealing in the suffocating heat. It had been that kind of day, a slow escalation to a startling unreality. He’d gone to town with Jaemu around 10 a.m. to pick up the cloth that Yaena would use to cut herself a new kurung for Eid. She had already picked out the material; he only needed to retrieve it. He regretted now his insistence that Jaemu carry it in a plastic bag when they walked to the demonstration outside the district police station rather than leaving it tied to his moto at the mosque. He hated the thought that it lay discarded in some puddle where he and Jaemu fell, or under the tire of one of these trucks. It broke Yaena’s heart to lose nice things to carelessness, and he trusted Ma-daw when she said this cloth was worth the expense— he had felt between his fingertips the soft fineness of the cotton. Her description of it as a bright, swirling orange and red sounded to him like the sunsets he saw as a boy with his father when he still had his sight and they would travel to Satun to help his uncle with his catch during the month that was rainiest on their own side of the peninsula. How strange that he could often “see” such things as colors with his fingers before being told? No stranger, perhaps, than the way the rain could be so relentless in Baan Nam Bo when they departed for his uncle’s on those childhood mornings, the surf so grey and churning, while just a few hours later, a hundred miles across the Kra Isthmus, the fishermen floated on a sea of 2