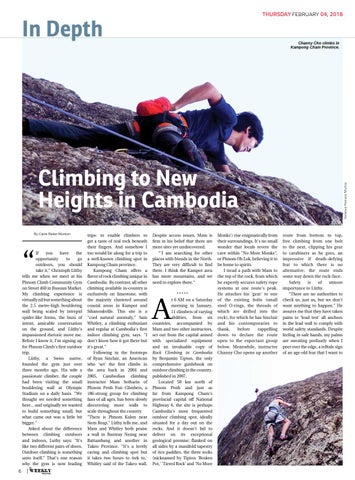 If you have the opportunity to go outdoors, you should take it,” Christoph Lüthy tells me when we meet at his Phnom Climb Community Gym on Street 460 in Russian Market. My climbing experience is virtually nil but something about the 2.5 metre-high bouldering wall being scaled by intrepid spider-like forms, the buzz of intent, amicable conversation on the ground, and Lüthy’s impassioned rhetoric move me. Before I know it, I&#39;m signing up for Phnom Climb&#39;s first outdoor trip. Lüthy, a Swiss native, founded the gym just over three months ago. His wife a passionate climber, the couple had been visiting the small bouldering wall at Olympic Stadium on a daily basis. “We thought we needed something here... and originally we wanted to build something small, but what came out was a little bit bigger.” Asked about the difference between climbing outdoors and indoors, Luthy says: “It’s like two different pairs of shoes. Outdoor climbing is something unto itself.” That’s one reason why the gym is now leading

trips: to enable climbers to get a taste of real rock beneath their fingers. And somehow I too would be along for a trip to a well-known climbing spot in Kampong Cham province. Kampong Cham offers a flavor of rock climbing unique in Cambodia. By contrast, all other climbing available in-country is exclusively on limestone, with the majority clustered around coastal areas in Kampot and Sihanoukville. This site is a “cool natural anomaly,” Sam Whitley, a climbing enthusiast and regular at Cambodia&#39;s first indoor climbing gym, says. “I don&#39;t know how it got there but it&#39;s great.” Following in the footsteps of Ryan Sinclair, an American who &#39;set&#39; the first climbs in the area back in 2004 and 2005, Cambodian climbing instructor Mam Sotharin of Phnom Penh Fun Climbers, a 186-strong group for climbing fans of all ages, has been slowly discovering more walls to scale throughout the country. “There is Phnom Kulen near Siem Reap,” Lüthy tells me, and Mam and Whitley both praise a wall in Banteay Neang near Battambang and another in Takeo Province. “It&#39;s a lovely caving and climbing spot but it takes two hours to trek to,&#39; Whitley said of the Takeo wall.

Despite access issues, Mam is firm in his belief that there are more sites yet undiscovered. “&#39;I am searching for other places with friends in the North. They are very difficult to find there. I think the Kampot area has more mountains, and we need to explore there.” ***** t 6 AM on a Saturday morning in January, 11 climbers of varying abilities, from six countries, accompanied by Mam and two other instructors, set out from the capital armed with specialized equipment and an invaluable copy of Rock Climbing in Cambodia by Benjamin Tipton, the only comprehensive guidebook on outdoor climbing in the country, published in 2007. Located 50 km north of Phnom Penh and just as far from Kampong Cham&#39;s provincial capital off National Highway 6, the site is perhaps Cambodia&#39;s most frequented outdoor climbing spot, ideally situated for a day out on the rocks. And it doesn&#39;t fail to deliver on its exceptional geological promise: flanked on all sides by a manifold tapestry of rice paddies, the three rocks (nicknamed by Tipton &#39;Broken Pot,&#39; &#39;Tiered Rock&#39; and &#39;No More

Monks&#39;) rise enigmatically from their surroundings. It&#39;s no small wonder that locals revere the cave within “No More Monks”, or Phnom Oh Lok, believing it to be home to spirits. I tread a path with Mam to the top of the rock, from which he expertly secures safety rope systems at one route&#39;s peak. He attaches his &#39;gear&#39; to one of the existing bolts (small steel O-rings, the threads of which are drilled into the rock), for which he has Sinclair and his contemporaries to thank, before rappelling down to declare the route open to the expectant group below. Meanwhile, instructor Channy Cho opens up another

Climbing to New Heights in Cambodia route from bottom to top, free climbing from one bolt to the next, clipping his gear to carabiners as he goes, an impressive if death-defying feat to which there is no alternative; the route ends some way down the rock-face. Safety is of utmost importance to Lüthy. “There are no authorities to check us, just us, but we don&#39;t want anything to happen.” He assures me that they have taken pains to &#39;load test&#39; all anchors in the lead wall to comply with world safety standards. Despite feeling in safe hands, my palms are sweating profusely when I peer over the edge, a telltale sign of an age-old fear that I want to

leave behind. Three of us step forward to attempt the first ascent on the newly-strung ropes, finding our footing tentatively at first, then with the greater resolve demanded by heady heights. Meanwhile avid climber, Léakhéna Sophan (Léa- to her friends) recounts the story of her first climb at this very spot with her ex-partner: halfway up vertigo got the better of her but, having come so far, he wouldn’t let her descend, despite her terrified cries. Confronting her trepidation head-on, she battled upwards, emerging at the top triumphant. She still suffers vertigo but says she wants to “face” her fear. And she does so with deft ease, practically strolling up one of the most challenging of all the routes at Kampong Cham, dubbed the &#39;Chicken in the Kitchen.&#39; As Rock Climbing in Cambodia warns, the start of ‘chicken’ is a doozy, forcing the climber to clamber in amongst

the branches of a tree at it&#39;s base, directly above which there are few suitable holds. &#39;It&#39;s hard at first but then easy,” Léa says nonchalantly. The camaraderie in the group grows as more people summit the wall. One climber encourages another: &#39;You will feel great at the top!&#39; This spirit is in tune with Lüthy&#39;s goal for Phnom Climb: “It&#39;s a community gym, so I hope that people will climb together,” he says. “We see it happening already. People come in, hang out, get to know one another. It&#39;s very satisfactory to see.” As for me? I completed &#39;Sus-Sa-Die&#39;, an aptly named initiatory route friendly to beginners, haltingly at first as I struggled to face my vertigo, then more dexterously on the second attempt, due in great part to Mam&#39;s coaching. The experience was exhilarating, and the journey worthwhile if only for the views of the patchwork of greens and greys

of fields, trees and rooftops scattering the area–not to mention the bird’s eye view of Highway 6. Lüthy says that he hopes to make these trips a “regular thing.” “We’ve got big ambitions,” he says. “We hope that climbing is something that people are excited about, and not only expats.” At the day&#39;s end, after being transfixed by the skills of some of the crew ascending mercilessly sheer granite, talk turns to more mundane things: everyday life in Phnom Penh. Léa admits to not going out much anymore, saving herself for loftier pursuits. &#39;&#39;I don&#39;t party much but I rock it every weekend!” Phnom Climb Community Gym’s lead climbing wall is now open, with an extended soft launch entry price of $5. It will be open on Saturday mornings 7-11am from February 6, with a hard launch scheduled for February 20. See www.phnomclimb.com for more information. 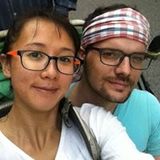