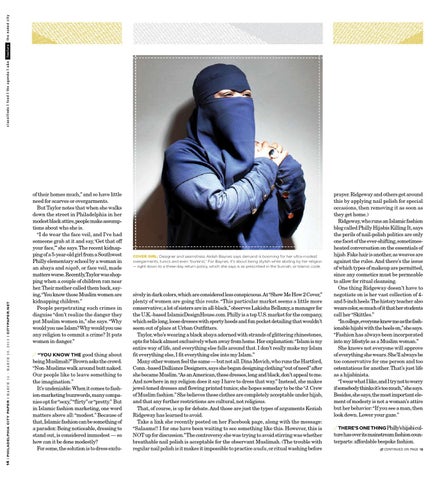 of their homes much,” and so have little need for scarves or overgarments. But Taylor notes that when she walks down the street in Philadelphia in her modest black attire, people make assumptions about who she is. “I do wear the face veil, and I’ve had someone grab at it and say, ‘Get that off your face,’” she says. The recent kidnapping of a 5-year-old girl from a Southwest Philly elementary school by a woman in an abaya and niqab, or face veil, made matters worse. Recently, Taylor was shopping when a couple of children ran near her. Their mother called them back, saying, “You know those Muslim women are kidnapping children.” People perpetrating such crimes in disguise “don’t realize the danger they put Muslim women in,” she says. “Why would you use Islam? Why would you use any religion to commit a crime? It puts women in danger.” “YOU KNOW THE good thing about being Muslimah?” Brown asks the crowd. “Non-Muslims walk around butt naked. Our people like to leave something to the imagination.” It’s undeniable: When it comes to fashion-marketing buzzwords, many companies opt for “sexy,” “flirty” or “pretty.” But in Islamic fashion marketing, one word matters above all: “modest.” Because of that, Islamic fashion can be something of a paradox: Being noticeable, dressing to stand out, is considered immodest — so how can it be done modestly? For some, the solution is to dress exclu-

COVER GIRL: Designer and seamstress Akilah Baynes says demand is booming for her ultra-modest overgarments, tunics and even “burkinis.” For Baynes, it’s about being stylish while abiding by her religion — right down to a three-day return policy, which she says is as prescribed in the Sunnah, or Islamic code.

sively in dark colors, which are considered less conspicuous. At “Show Me How 2 Cover,” plenty of women are going this route. “This particular market seems a little more conservative; a lot of sisters are in all-black,” observes Lakisha Bellamy, a manager for the U.K.-based IslamicDesignHouse.com. Philly is a top U.S. market for the company, which sells long, loose dresses with sporty hoods and fun pocket detailing that wouldn’t seem out of place at Urban Outfitters. Taylor, who’s wearing a black abaya adorned with strands of glittering rhinestones, opts for black almost exclusively when away from home. Her explanation: “Islam is my entire way of life, and everything else falls around that. I don’t really make my Islam fit everything else, I fit everything else into my Islam.” Many other women feel the same — but not all. Dina Movich,who runs the Hartford, Conn.-based Dalliance Designers, says she began designing clothing “out of need” after she became Muslim. “As an American, these dresses, long and black, don’t appeal to me. And nowhere in my religion does it say I have to dress that way.” Instead, she makes jewel-toned dresses and flowing printed tunics; she hopes someday to be the “J. Crew of Muslim fashion.” She believes these clothes are completely acceptable under hijab, and that any further restrictions are cultural, not religious. That, of course, is up for debate. And those are just the types of arguments Keziah Ridgeway has learned to avoid. Take a link she recently posted on her Facebook page, along with the message: “Salaams!! I for one have been waiting to see something like this. However, this is NOT up for discussion.” The controversy she was trying to avoid stirring was whether breathable nail polish is acceptable for the observant Muslimah. (The trouble with regular nail polish is it makes it impossible to practice wudu, or ritual washing before

prayer. Ridgeway and others get around this by applying nail polish for special occasions, then removing it as soon as they get home.) Ridgeway, who runs an Islamic fashion blog called Philly Hijabis Killing It, says the perils of nail-polish politics are only one facet of the ever-shifting, sometimesheated conversation on the essentials of hijab. Fake hair is another, as weaves are against the rules. And there’s the issue of which types of makeup are permitted, since any cosmetics must be permeable to allow for ritual cleansing. One thing Ridgeway doesn’t have to negotiate on is her vast collection of 4and 5-inch heels. The history teacher also wears color, so much of it that her students call her “Skittles.” “In college,everyone knew me as the fashionable hijabi with the heels on,” she says. “Fashion has always been incorporated into my lifestyle as a Muslim woman.” She knows not everyone will approve of everything she wears. She’ll always be too conservative for one person and too ostentatious for another. That’s just life as a hijabinista. “I wear what I like, and I try not to worry if somebody thinks it’s too much,” she says. Besides, she says, the most important element of modesty is not a woman’s attire but her behavior: “If you see a man, then look down. Lower your gaze.” THERE’S ONE THING Philly’s hijabi culture has over its mainstream fashion counterparts: affordable bespoke fashion. CONTINUED ON PAGE 16 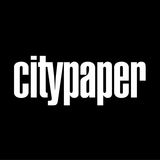