Stealth of the Ninja (Book 8) 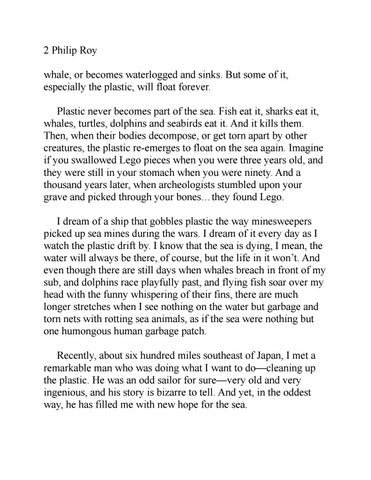 2 Philip Roy whale, or becomes waterlogged and sinks. But some of it, especially the plastic, will float forever. Plastic never becomes part of the sea. Fish eat it, sharks eat it, whales, turtles, dolphins and seabirds eat it. And it kills them. Then, when their bodies decompose, or get torn apart by other creatures, the plastic re-emerges to float on the sea again. Imagine if you swallowed Lego pieces when you were three years old, and they were still in your stomach when you were ninety. And a thousand years later, when archeologists stumbled upon your grave and picked through your bones…they found Lego. I dream of a ship that gobbles plastic the way minesweepers picked up sea mines during the wars. I dream of it every day as I watch the plastic drift by. I know that the sea is dying, I mean, the water will always be there, of course, but the life in it won’t. And even though there are still days when whales breach in front of my sub, and dolphins race playfully past, and flying fish soar over my head with the funny whispering of their fins, there are much longer stretches when I see nothing on the water but garbage and torn nets with rotting sea animals, as if the sea were nothing but one humongous human garbage patch. Recently, about six hundred miles southeast of Japan, I met a remarkable man who was doing what I want to do––cleaning up the plastic. He was an odd sailor for sure––very old and very ingenious, and his story is bizarre to tell. And yet, in the oddest way, he has filled me with new hope for the sea.

Stealth of the Ninja (Book 8) 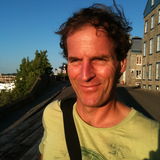