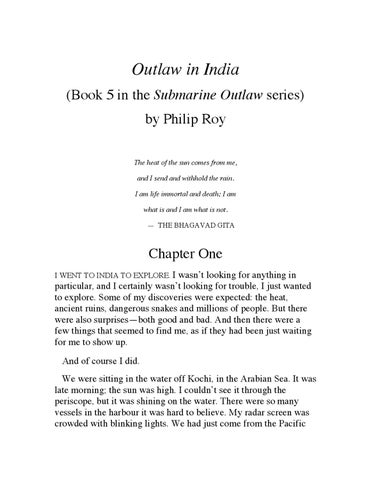 Outlaw in India (Book 5 in the Submarine Outlaw series) by Philip Roy The heat of the sun comes from me, and I send and withhold the rain. I am life immortal and death; I am what is and I am what is not. — THE BHAGAVAD GITA

Chapter One I WENT TO INDIA TO EXPLORE. I

wasn’t looking for anything in particular, and I certainly wasn’t looking for trouble, I just wanted to explore. Some of my discoveries were expected: the heat, ancient ruins, dangerous snakes and millions of people. But there were also surprises—both good and bad. And then there were a few things that seemed to find me, as if they had been just waiting for me to show up. And of course I did. We were sitting in the water off Kochi, in the Arabian Sea. It was late morning; the sun was high. I couldn’t see it through the periscope, but it was shining on the water. There were so many vessels in the harbour it was hard to believe. My radar screen was crowded with blinking lights. We had just come from the Pacific

where we could sail for days and days without seeing a single ship. Here, it looked as though we had just stumbled into a bee’s nest. There was a naval base here, too, according to my guide book, but I couldn’t see it. I wondered if the Indian navy had submarines. We had been at sea for weeks now and were anxious to get out and stretch our legs and explore. If you stay cooped up too long, you go crazy. But first we needed to hide the sub. Seaweed was already out, hanging around with other seagulls no doubt, and eating dead things. Hollie’s nose was twitching, sniffing the smells of India that had seeped in when the hatch was open. He wanted out. “Just a bit longer, Hollie. We have to find a place to hide first.” He looked at me and sighed. I steered into the harbour. Normally, we would enter a harbour like this only at night, but with so many vessels, who would notice the periscope of a small submarine? Who would be watching with sonar? It would be like trying to find a pear in a barrel of apples—no one. I had never seen so many ships in one harbour before. It was incredible. There were freighters, tankers, barges, tugboats, Chinese junks, ferries, giant cruise ships, small cruise ships, sailboats, fishing trawlers, fishing boats, dories—everything but navy ships. Where were the navy ships? The harbour was split into channels, like fingers of the sea, and was a little confusing. The naval base must have been down one of those channels. Through the periscope, I caught a glimpse of the Chinese fishing nets Kochi was famous for. They looked awesome. They were made of teak and bamboo poles and the nets hung over the water like giant spider webs. They were balanced so evenly it took only a few men to dip them into the sea and pull them out with fish. It was an ancient fishing method, but was still used today because it worked so well.

I wanted to take pictures to show my grandfather, and then ask him why he didn’t fish like that back in Newfoundland. My grandfather didn’t like trying new things, which was why I liked showing him new things. I liked to challenge him. He’d make a face like a prune and say something like, “Don’t fix it if it isn’t broken.” But I wished he could see these nets because I knew they would really interest him. The oldest part of Kochi seemed a good place to hide. It was a seaport from the days of wooden sailing ships. There were ancient warehouses hanging over the water, and some were crooked and falling over. Broken piers stuck out of the water like reeds in a river. Some were broken in half like broken teeth. This part of the seaport had been abandoned a long time ago. Today, all merchandise is carried in metal containers on giant ships that are loaded and unloaded by monstrous cranes in concrete terminals. When I turned the periscope around I could see the cranes miles across the harbour. Old Kochi was a ghost town now—a perfect place to hide a submarine. I steered into a channel where the old warehouses were most rundown, and cruised along on battery power until I saw one where I thought maybe we could hide inside. The warehouse had a small boathouse at the very end of it, like a shack on the side of a cottage, and there was just enough clearance under water—about fifteen feet—for us to come inside. But I’d have to be extremely careful to not bump the poles, or the boathouse would tumble down around us and maybe take the whole warehouse with it. I was just about to steer in when I heard a beep on the radar. Another vessel was coming into the channel. I turned the periscope around and saw a small powered boat, possibly a coastguard vessel, coming in our direction. Shoot! I hesitated. Should we stay or should we go? Did they know we were here? Either it was a coincidence, or they were investigating something they had picked up on radar, but couldn’t identify—us.

I shut off our radar so we would stop bouncing sound waves off them, which was one way they would find us for sure if they had sophisticated listening equipment, which they might have if they were the coastguard. I kept our sonar on. It was unlikely such a small boat would have sonar. I pulled the periscope down, let water into the tanks, and submerged gently. We couldn’t submerge much; the channel was only seventy-five feet deep. As we went down, I had to decide whether to sit still and let them pass over us, or take off. The problem with decisions like this is that there’s little time to think; you have to choose quickly. I put my hand on the battery switch and hesitated. The boat approached. Were they slowing down? If they slowed down we would definitely take off. No, they didn’t slow down. So we stayed. They went over us and kept on going. Whew! Then, when they reached a bridge, about half a mile down the channel, they turned around and started back. Rats! That wasn’t good. Now I had that uneasy feeling in the pit of my stomach that said, “Get the heck out of here!” So I did. I cranked up the batteries all the way and motored to the end of the channel as fast as the sub would go on electric power, turned to port, and headed out to sea. I watched the sonar screen to see if they would follow us. They did, although they didn’t ride right above us, which told me that they knew we were here, but couldn’t locate us exactly. Maybe somebody had spotted us and reported us. That had happened many times before in Newfoundland. We followed the ocean floor down to two hundred feet as we motored out to sea. It took awhile, and the coastguard boat followed us the whole way. Then I levelled off and turned to starboard. The coastguard kept going straight. Yes! We had lost them. They had never really known where we were; they had been just guessing. But we couldn’t leave yet. We had to go back for Seaweed. I figured we could sneak in at night, when we’d look no

different on radar from any sailboat. In the meantime, we could hide offshore by sailing directly beneath a slowly passing freighter, so as to appear as one vessel on sonar and radar. It was a great way to be invisible, though it was noisy underneath a ship’s engines. We had done it before. It didn’t take long to find a freighter. I could tell what kind of ship it was even without seeing it, by its shape on the sonar screen. Tankers were easiest to identify because they were so big. Freighters had a sharper bow and flatter stern, as a rule, although the bigger the ship, the broader the bow. Sometimes older or smaller freighters had a pointed stern. This one was not very big and was only cutting twelve knots, which was pretty easy to follow on battery power. I figured we’d ride beneath her for ten miles or so, then find another freighter going in the opposite direction, and follow her back. When it turned dark, we’d sneak into the harbour. Hollie took a deep breath and sighed. “I’m sorry, Hollie. I’m trying. We really don’t want to get caught.” We chased the small freighter for a few miles until we were right underneath her, then we came up to just twenty feet beneath her keel. Her engines were pretty loud. Suddenly, she did something very strange. She turned sharply to port. That was odd. Why would she do that? Was she trying to avoid something in the water? Sonar didn’t reveal anything in her path. And then, she turned again, to starboard. What was going on? Did she know we were here? I doubted it. I was so curious I decided to drop behind, surface to periscope depth and take a peek. I dropped back a few hundred feet, came up, raised the periscope, and looked through it. As my eyes adjusted to the light in the periscope, I got a terrible shock. The ship was battleship grey. She was carrying guns. She wasn’t a freighter at all, she was a frigate, a navy frigate. We were tailing a naval ship!

Although I knew we were in big trouble, I didn’t quite grasp how bad it was until some sailors on the stern shot something out of a small tube-like cannon towards us. At first, I thought it was just a flare—a warning—because it went through the air in an arc like a flare. But there was no coloured streak. Suddenly, I realized what it was even before it hit the water. It was a depth charge. “Hollie!” I grabbed him, hit the dive switch, and ran for my hanging cot. I threw myself on the bed with Hollie against my stomach just as the depth charge exploded. It blew up beneath us. It was like getting kicked by a horse. My teeth bit into my tongue. The blast hurt my ears, and there were strange sounds in the water following it. We were diving now. I held onto Hollie tightly and covered his ears. I wished I could have covered mine, because a second blast exploded right outside the hull. And even though my eyes were shut, I saw red. It blasted my ears so violently they started ringing and wouldn’t stop. It was like being inside a thunder clap. The lights went out in the sub. The explosion knocked the power out completely. Everything went dark. And we were going down.