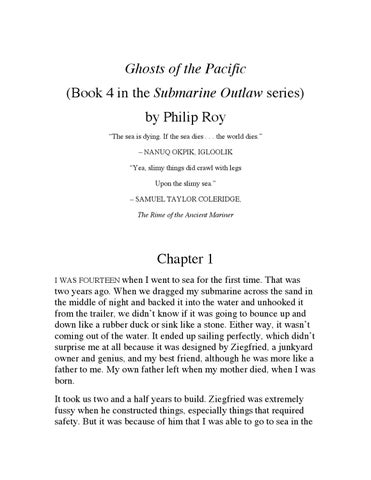 Ghosts of the Pacific (Book 4 in the Submarine Outlaw series) by Philip Roy “The sea is dying. If the sea dies . . . the world dies.” – NANUQ OKPIK, IGLOOLIK “Yea, slimy things did crawl with legs Upon the slimy sea.” – SAMUEL TAYLOR COLERIDGE, The Rime of the Ancient Mariner

Chapter 1 I WAS FOURTEEN when

I went to sea for the first time. That was two years ago. When we dragged my submarine across the sand in the middle of night and backed it into the water and unhooked it from the trailer, we didn’t know if it was going to bounce up and down like a rubber duck or sink like a stone. Either way, it wasn’t coming out of the water. It ended up sailing perfectly, which didn’t surprise me at all because it was designed by Ziegfried, a junkyard owner and genius, and my best friend, although he was more like a father to me. My own father left when my mother died, when I was born. It took us two and a half years to build. Ziegfried was extremely fussy when he constructed things, especially things that required safety. But it was because of him that I was able to go to sea in the

first place, and because of him that I am still alive two years later. If you touched the hull of my submarine, it would feel hard and cold like the shell of a loggerhead sea turtle or the fin of a whale. It is about the size of a small whale—twenty feet long and eight feet in diameter, with a portal jutting up another three feet—just big enough for one person, and a dog and seagull crew. It is beautiful in a way, swallowed up by the dark waters of Newfoundland, although it is a kind of beauty that is not really friendly. Whales don’t look friendly up close; they look scary, but in a beautiful sort of way. Inside, the sub is lined with cedar and glows with light. It is warm and cosy, even in the coldest weather and wildest storms. And though the hull is made of steel, and steel sinks like lead, the sub floats like a coconut—about three-quarters submerged. It is in perfect balance between weight and displacement. This is buoyancy. Add a little water, and you sink. Add a little air, and you rise. Attach an engine and propeller, and you can sail anywhere in the world you want to. And you can hide. This is the magic of submarines. This is my world. In two years, we had taken three journeys: around the Maritimes, across the Atlantic and into the Mediterranean, and up the St. Lawrence River to Montreal, where I met my father and sister for the first time. Now, I wanted to go to the Pacific, a voyage that would take us right around the world. The Pacific Ocean was like a dragon in my imagination when I was little, wrapping itself around the world and spinning typhoons and tsunamis with its tail while the rest of the world was sleeping. It is the biggest body on earth. I used to think that everything in the Pacific was bigger than everywhere else: bigger fish, bigger waves, bigger storms, bigger treasures. I still didn’t know if that was true or not. And I figured it was time to find out. But Sheba, my friend and advisor, wasn’t entirely happy with my

plans. Sheba was the first person I met when I went to sea the very first time. She looked like a mermaid, without the tail. She was tall, like Ziegfried, but lean and beautiful. Ziegfried fell in love with her the very first time he saw her, and he could barely speak for about two weeks after. Sheba had red hair that went all the way down to her belly, with little wave-like curls in it, and green eyes like a cat. She wore flowery, flowing dresses and jewellery that clinked and clanged every time she moved. She lived on the tiniest of islands, in Bonavista Bay, with a houseful of dogs, cats, goats, birds, reptiles, bees and butterflies. She grew all of her own food hydroponically, read for hours every day, and seemed to know everything, sometimes even what was about to happen. She believed in ghosts and mermaids, and loved everybody and everything. Just being around her made you feel happy, even when her island was wrapped in fog for days on end. Now Sheba wanted to know why, when the Pacific was filled with so many wonderful things, was I bent on seeing the darker things, the dead and ghostly things. We were sitting at her kitchen table listening to one of her mother’s records. Her mother had been a famous opera singer. The music made Sheba’s eyes water, even though it sounded to me like a bunch of singers trying to see who could sing the loudest. Edgar, the kitchen goat, was leaning against the wood stove and the heat was making his eyelids fall and his head droop. He had already singed his whiskers, but he couldn’t stay away from the stove. Sheba wrapped her hands around mine and looked searchingly into my eyes. “So. My dear young explorer, why Saipan?” I glanced at the atlas on the table. Saipan was just a tiny speck in the vast Pacific Ocean, and yet the most fascinating things had happened there—but not the kinds of things that Sheba was interested in. “Because it’s so interesting. All of the things that happened there are unbelievable.” “Alfred. People died there. They died by the thousands in violent

fighting. Tourists still find the skulls of soldiers in the jungle, of young men no older than you. They say the rivers ran with blood, literally.” “I know. I read that.” “Families jumped to their deaths from cliffs instead of surrendering.” “I know. They’re called the Suicide Cliffs.” She frowned. “Alfred. They sealed up caves with people inside, or they shot flames inside and burned them alive.” I stared at Sheba’s hands on mine. All of those things just made me want to go there more, but I knew she would never understand that. “And you realize that that was where they kept the atomic bomb before they dropped it on Hiroshima, don’t you?” “Yes.” She started rubbing my hands as if she were kneading bread. “Then why on earth do you want to see all of that, you silly thing? The Pacific is a beautiful place, incredibly enormous. Why go exactly where inhumanity was let loose and ran free, creating terror?” I shrugged. “I don’t know; I just want to see those places to know that they are real. I want to see them for myself.” “Oh, they are real enough. You’ll find that out. But be careful what you wish for, Alfred. We always find what we seek; we just don’t always seek what we should.” “I’m always careful.” “That’s not what I meant. You know what I mean.”

“Yes.” “Why fill your head with the darkest side of human nature? If you invite darkness into your head, it will surely come. Why not seek things that lift you up instead, that fill your heart with joy and let you soar on the wings of happiness? Why go looking for ghosts?” “But you like ghosts. You were the one who taught me not to be afraid of them.” “I like ghosts, yes, but I don’t like the things that made them that way. I don’t like inhumanity.” “But I want to find out if there’s something about certain places that makes terrible things happen there. Or is everywhere the same? I don’t think that everywhere is the same. And I already know that beautiful places exist. I’ve seen them.” She let go of my hands. “You’re sixteen. You have to find out for yourself, I suppose.” “Exactly.” The music changed. Now there was just one woman singing and her song was very sad. Sheba’s eyes welled up. I felt sad for her. “Are you thinking of your mom?” She looked at me with the most sympathetic gaze. “No, my dear boy, I am not. I am thinking of yours. You have no idea how much I wish she could see you now, all grown up and about to travel around the world all by yourself. She would be so proud of you. Any mother would.” “My mother would be happy to know I have a friend like you.” Sheba pulled a handkerchief from her pocket and blew her nose.

“Sweet boy. Okay then, which way will you go?” “Well, my first choice is to sail south to Bermuda, cross the Caribbean Sea and pass through the Panama Canal. That would take us to the Pacific. That’s the easiest way, but I don’t have papers for the sub. I’m pretty sure they’ll ask me for papers if I go through the canal. If I don’t have any, they could take the sub from me if they wanted to. But if I don’t go through the canal, and sail around South America, it will take forever, and I’d probably go insane.” “What about the Northwest Passage then, in the Arctic?” “It’s a lot shorter, but it’s more dangerous because of the ice. There isn’t supposed to be as much ice as there used to be, but it’s still dangerous. Because my sub is diesel-electric, it has to breathe occasionally and recharge its batteries. We can’t afford to get stuck under the ice. The longest we can run the batteries underwater is twenty hours. Then we have to come up, grab air and run the engine.” “Hmmm. You have a decision to make. I will read your cards.” She got up and reached for the cards on the shelf. They were really old. They had rich, colourful, strange, magical characters on them. I thought maybe the three of us might belong there. Sheba would be a soothsayer, Ziegfried a giant, and me, the boy who goes to sea. She shuffled the cards loosely, handed them to me and told me to run my hands over them, which I did. Then she took them back, spread them across the table, turned them over one by one, and began to read my future. “The Hanged Man. You will turn around, Alfred. If you sail through the Panama Canal, they will turn you around and force you back.” I looked at the card. The hanged man was green and had pointed

shoes that curled up like fiddleheads. He was covered in leaves and hanging upside-down. “Are you sure? What about that card?” “The Five of Cups.” She shook her head gravely and her earrings, little Greek temples, tinkled and flashed the kitchen light over the cards. “It’s worse. You will suffer loss. They will take your submarine away from you. I am sure of it.” I shook my head. I would never let that happen. “And if I sail north?” She gathered up the cards, reshuffled them and repeated the process. “Let’s see . . . The Nine of Wands. That’s good. If you sail north, you will be tested, but you will triumph. Oh!” “What?” She clapped her hands together and burst into a smile. “The Two of Cups.” “So?”  “You will find love.”  “What?”  “You are going to find love. You will meet someone very special, and feel drawn to her. Oh, Alfred, that is lovely!” “I don’t think that is lovely. I’m not going to find love. I’m an explorer. I’m sailing to the Pacific to explore, not to find love.” “Nevertheless, you will.”

Ghosts of the Pacific (Book 4)

Ghosts of the Pacific (Book 4)