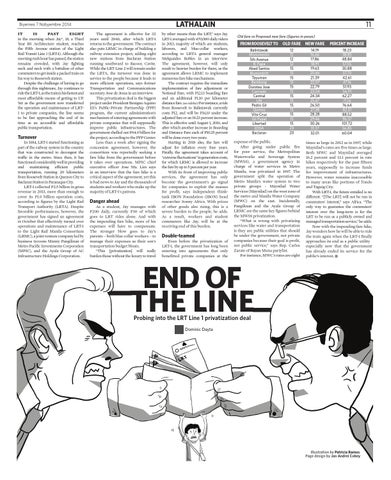 IT IS PAST EIGHT in the morning when Jay*, 18, a Third Year BS Architecture student, reaches the Fifth Avenue station of the Light Rail Transit Line 1 (LRT-1). Although the morning rush hour has passed, the station remains crowded, with Jay fighting neck and neck with a battalion of other commuters to get inside a packed train on his way to Roosevelt station. Despite the challenge of having to go through this nightmare, Jay continues to ride the LRT-1, as the train is his fastest and most affordable means of getting to UP. Yet as the government now transferred the operation and maintenance of LRT1 to private companies, the line seems to be fast approaching the end of its time as an accessible and affordable public transportation.

Turnover In 1984, LRT-1 started functioning as part of the railway system in the country that was constructed to decongest the traffic in the metro. Since then, it has functioned considerably well in providing and maintaining efficient public transportation, running 20 kilometers from Roosevelt Station in Quezon City to Baclaran Station in Paranaque City. LRT-1 collected P2.5 billion in gross revenue in 2013, more than enough to cover its P1.9 billion operation costs, according to figures by the Light Rail Transport Authority (LRTA). Despite favorable performances, however, the government has signed an agreement in October that effectively turned over operations and maintenance of LRT-1 to the Light Rail Manila Consortium (LRMC), a joint venture company led by business tycoons Manny Pangilinan of Metro Pacific Investments Corporation (MPIC), and the Ayala Group of AC Infrastructure Holdings Corporation.

Biyernes 7 Nobyembre 2014 The agreement is effective for 32 years until 2046, after which LRT-1 returns to the government. The contract also puts LRMC in charge of building a railway extension project, adding eight new stations from Baclaran Station running southward to Bacoor, Cavite. While the LRT Line 2 will remain under the LRTA, the turnover was done in service to the people because it leads to more efficient operations, says former Transportation and Communications secretary Jose de Jesus in an interview. This privatization deal is the biggest project under President Benigno Aquino III&#39;s Public-Private Partnership (PPP) program, the current administration’s mechanism of entering agreements with private companies that will supposedly improve public infrastructures. The government shelled out P64.9 billion for the project, according to the PPP Center. Less than a week after signing the concession agreement, however, the consortium was reportedly seeking a fare hike from the government before it takes over operations. MPIC chief executive officer Jose Ma. Lim says in an interview that the fare hike is a critical aspect of the agreement, yet this is bad news to Jay and the thousands of students and workers who make up the majority of LRT-1&#39;s patrons.

Danger ahead As a student, Jay manages with P200 daily, currently P30 of which goes to LRT rides alone. And with the impending fare hike, more of his expenses will have to compensate. The stronger blow goes to Jay’s parents – both blue collar workers – to manage their expenses as their son&#39;s transportation budget bloats. “This [privatization] will really burden those without the luxury to travel

by other means than the LRT,” says Jay. LRT-1 averaged with 470,000 daily riders in 2013, majority of which are students, laborers, and blue-collar workers, according to LRTA general manager Melquaides Robles in an interview. The agreement, however, will only result to heavier burden for them, as the agreement allows LRMC to implement numerous fare hike mechanisms. The contract requires the immediate implementation of fare adjustment or Notional Fare, with P12.13 boarding fare and an additional P1.10 per kilometer distance fare. (see sidebar) For instance, a ride from Roosevelt to Balintawak currently costs P12, and will be P14.19 under the adjusted fare or an 18.23 percent increase. This is effective until August 1, 2016, and after which another increase in Boarding and Distance Fare each of P10.25 percent will be done every two years. Starting in 2018 also, the fare will adjust for inflation every four years. Finally, the agreement takes account of &quot;extreme fluctuations&quot; in generation costs, for which LRMC is allowed to increase the fare by up to 5 percent per year. With its front of improving public services, the agreement has only become the government&#39;s go signal for companies to exploit the masses for profit, says independent thinktank IBON Foundation (IBON) head researcher Sonny Africa. With prices of other goods also rising, this is a severe burden to the people, he adds. As a result, workers and student commuters like Jay, will be at the receiving end of this burden.

Double-teamed Even before the privatization of LRT-1, the government has long been entering into agreements that only benefitted private companies at the

expense of the public. After going under public fire for poor service, the Metropolitan Waterworks and Sewerage System (MWSS), a government agency in charge of water services in Metro Manila, was privatized in 1997. The government split the operation of Metro Manila&#39;s water system to two private groups - Maynilad Water Services (Maynilad) on the west zone of the metro and Manila Water Company (MWC) on the east. Incidentally, Pangilinan and the Ayala Group of LRMC are the same key figures behind the MWSS privatization. “What is wrong with privatizing services like water and transportation is they are public utilities that should be under the government, not private companies because their goal is profit, not public service,” says Rep. Carlos Zarate of Bayan Muna partylist. For instance, MWC&#39;s rates are eight

END OF THE LINE

times as large in 2012 as in 1997, while Maynilad&#39;s rates are five times as large. Both MWC and Maynilad averaged 16.2 percent and 13.1 percent in rate hikes respectively for the past fifteen years, supposedly to increase funds for improvement of infrastructures. However, water remains inaccessible to many areas like portions of Tondo and Taguig City. With LRT-1, the future entailed is no different. “[The LRT] will not be run in commuters&#39; interest,” says Africa. “The only way to guarantee the commuters&#39; interest over the long-term is for the LRT to be run as a publicly owned and managed transportation service,&quot; he adds. Now with the impending fare hike, Jay wonders how he will be able to ride the train again when the LRT-1 finally approaches its end as a public utility― especially now that the government has already ended its service for the public’s interest. 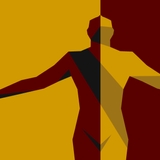