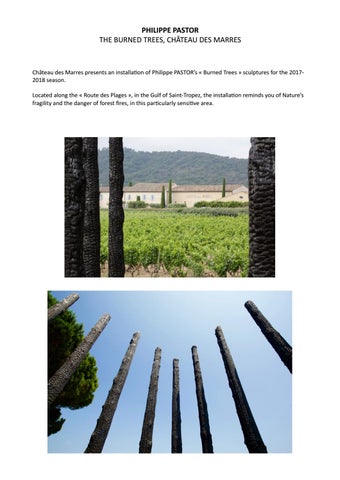 Château des Marres presents an installation of Philippe PASTOR’s « Burned Trees » sculptures for the 20172018 season. Located along the « Route des Plages », in the Gulf of Saint-Tropez, the installation reminds you of Nature’s fragility and the danger of forest fires, in this particularly sensitive area.

PHILIPPE PASTOR Philippe Pastor was born in 1961 in Monaco. Painter and sculptor, Philippe Pastor creates a personalized vision of Nature, translating Man’s interaction with his environment. His body of work, created close to nature, reflects his commitment to the protection of the planet. In his paintings, sometimes at monumental scale, the artist use living matter and its transformation through time and immediate surroundings. Combining soil, pigments, minerals and plants of all kinds, the artist represents though his works, his vision of life, environmental destruction and Man’s involvement in society.

THE BURNED TREES PROJECT In 2003, enraged by the forest fires of Massif des Maures, in the South of France, he began « The Burned Trees » sculpture series, using the region’s scorched tree trunks. These sculptures have become a symbol of deforestation and can be found exhibited throughout the world, including New York, Singapore, or United Nations Headquarters in Nairobi. At the time, Pastor extends his commitment to Nature through his support and participation in the project « Plant for the Planet: the Billion Tree Campaign », launched in 2007 by the United Nations Environment Program, UNEP. It’s also in 2007 that the artist creates the association « Art & Environnement », through which he will plant numerous trees. This initiative is placed under the High Patronage of His Serene Highness the Prince Albert II of Monaco and the professor Wangari Maathai, Nobel Peace Prize winner in 2004. In 2012, « The Burned Trees » project supports the United Nations Programme for the Environment to promote the use of rainwater in the Tana river basin in Kenya. In 2014-2015, Philippe Pastor presents « The Burned Trees » sculptures at the Gare du Nord and Gare Montparnasse in Paris, in collaboration with the Foundation Nicolas Hulot and SNCF, on the occasion of the 20th anniversary of the Kyoto Treaty and the 2015 United Nations Climate Change Conference in Paris. Thus, the artist gets involved in a reforestation campaign in Madagascar, together with the Foundation Nicolas Hulot. In 2015, he is the official artist of the Monaco Pavilion at the Universal Exhibition in Milan, where « TheBurned Trees » sculptures are integrated into the exterior architecture of the Principality’s pavilion. The theme of the exhibition « Feeding the planet, Energy for Life » - is strongly connected with sustainable development issues and environmental protection which are major concerns for the artist. In 2016, following the participation at Monaco’s Pavilion, « The Burned Trees » were exhibited in Monaco Principality, on the Grimaldi Esplanade, at the AEF art fair entrance, in front of the exhibition « Francis Bacon: Monaco and French Culture ». During the winter season, an installation was shown in the centre of Megève, in an ancient farmyard.