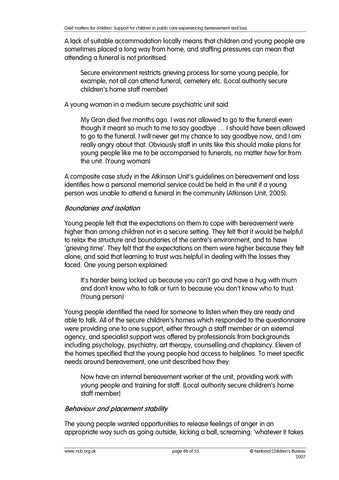 A lack of suitable accommodation locally means that children and young people are sometimes placed a long way from home, and staffing pressures can mean that attending a funeral is not prioritised. Secure environment restricts grieving process for some young people, for example, not all can attend funeral, cemetery etc. (Local authority secure children’s home staff member) A young woman in a medium secure psychiatric unit said My Gran died five months ago. I was not allowed to go to the funeral even though it meant so much to me to say goodbye … I should have been allowed to go to the funeral. I will never get my chance to say goodbye now, and I am really angry about that. Obviously staff in units like this should make plans for young people like me to be accompanied to funerals, no matter how far from the unit. (Young woman) A composite case study in the Atkinson Unit's guidelines on bereavement and loss identifies how a personal memorial service could be held in the unit if a young person was unable to attend a funeral in the community (Atkinson Unit, 2005).

Boundaries and isolation Young people felt that the expectations on them to cope with bereavement were higher than among children not in a secure setting. They felt that it would be helpful to relax the structure and boundaries of the centre’s environment, and to have ‘grieving time’. They felt that the expectations on them were higher because they felt alone, and said that learning to trust was helpful in dealing with the losses they faced. One young person explained: It’s harder being locked up because you can’t go and have a hug with mum and don’t know who to talk or turn to because you don’t know who to trust. (Young person) Young people identified the need for someone to listen when they are ready and able to talk. All of the secure children’s homes which responded to the questionnaire were providing one to one support, either through a staff member or an external agency, and specialist support was offered by professionals from backgrounds including psychology, psychiatry, art therapy, counselling and chaplaincy. Eleven of the homes specified that the young people had access to helplines. To meet specific needs around bereavement, one unit described how they: Now have an internal bereavement worker at the unit, providing work with young people and training for staff. (Local authority secure children’s home staff member)

Behaviour and placement stability The young people wanted opportunities to release feelings of anger in an appropriate way such as going outside, kicking a ball, screaming: ‘whatever it takes www.ncb.org.uk This report explores the impact of bereavement on looked after children’s lives, against the backdrop of the other losses they face. It look...

This report explores the impact of bereavement on looked after children’s lives, against the backdrop of the other losses they face. It look...