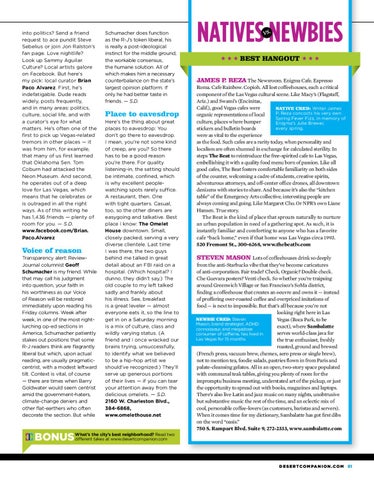 into politics? Send a friend request to ace pundit Steve Sebelius or join Jon Ralston’s fan page. Love nightlife? Look up Sammy Aguilar. Culture? Local artists galore on Facebook. But here’s my pick: local curator Brian Paco Alvarez. First, he’s indefatigable. Dude reads widely, posts frequently, and in many areas: politics, culture, social life, and with a curator’s eye for what matters. He’s often one of the first to pick up Vegas-related tremors in other places — it was from him, for example, that many of us first learned that Oklahoma Sen. Tom Coburn had attacked the Neon Museum. And second, he operates out of a deep love for Las Vegas, which means that he celebrates or is outraged in all the right ways. As of this writing he has 1,436 friends — plenty of room for you. — S.D. www.facebook.com/Brian. Paco.Alvarez

Voice of reason Transparency alert: ReviewJournal columnist Geoff Schumacher is my friend. While that may call his judgment into question, your faith in his worthiness as our Voice of Reason will be restored immediately upon reading his Friday columns. Week after week, in one of the most rightlurching op-ed sections in America, Schumacher patiently stakes out positions that some R-J readers think are flagrantly liberal but which, upon actual reading, are usually pragmaticcentrist, with a modest leftward tilt. Context is vital, of course — there are times when Barry Goldwater would seem centrist amid the government-haters, climate-change deniers and other flat-earthers who often decorate the section. But while

Schumacher does function as the R-J’s token liberal, his is really a post-ideological instinct for the middle ground, the workable consensus, the humane solution. All of which makes him a necessary counterbalance on the state’s largest opinion platform. If only he had better taste in friends. — S.D.

Place to eavesdrop Here’s the thing about great places to eavesdrop: You don’t go there to eavesdrop. I mean, you’re not some kind of creep, are you? So there has to be a good reason you’re there. For quality listening-in, the setting should be intimate, confined, which is why excellent peoplewatching spots rarely suffice. A restaurant, then. One with tight quarters. Casual, too, so the other diners are easygoing and talkative. Best place I know: The Omelet House downtown. Small, closely packed, serving a very diverse clientele. Last time I was there, the two guys behind me talked in great detail about an FBI raid on a hospital. (Which hospital? I dunno, they didn’t say.) The old couple to my left talked sadly and frankly about his illness. See, breakfast is a great leveler — almost everyone eats it, so the line to get in on a Saturday morning is a mix of culture, class and wildly varying status. (A friend and I once wracked our brains trying, unsuccessfully, to identify what we believed to be a hip-hop artist we should’ve recognized.) They’ll serve up generous portions of their lives — if you can tear your attention away from the delicious omelets. — S.D. 2160 W. Charleston Blvd., 384-6868, www.omelethouse.net

Natives NEWBIES Best Hangout James P. Reza The Newsroom. Enigma Cafe. Espresso Roma. Cafe Rainbow. Copioh. All lost coffeehouses, each a critical component of the Las Vegas cultural scene. Like Macy’s (Flagstaff, Ariz.) and Swami’s (Encinitas, Calif.), good Vegas cafes were native CRED: Writer James P. Reza concocts his very own organic representations of local Spring Fever Fizz, in memory of culture, places where bumper Enigma’s Julie Brewer, every spring. stickers and bulletin boards were as vital to the experience as the food. Such cafes are a rarity today, when personality and localism are often shunned in exchange for calculated sterility. In steps The Beat to reintroduce the free-spirited cafe to Las Vegas, embellishing it with a quality food menu born of passion. Like all good cafes, The Beat fosters comfortable familiarity on both sides of the counter, welcoming a cadre of students, creative spirits, adventurous attorneys, and off-center office drones, all downtown denizens with stories to share. And because it’s also the “kitchen table” of the Emergency Arts collective, interesting people are always coming and going. Like Margaret Cho. Or NPR’s own Liane Hansen. True story. The Beat is the kind of place that sprouts naturally to nurture an urban population in need of a gathering spot. As such, it is instantly familiar and comforting to anyone who has a favorite cafe “back home,” even if that home was Las Vegas circa 1993. 520 Fremont St., 300-6268, www.thebeatlv.com steven mason Lots of coffeehouses drink so deeply from the anti-Starbucks vibe that they’ve become caricatures of anti-corporatism. Fair trade? Check. Organic? Double check. Che Guevara posters? Venti check. So whether you’re traipsing around Greenwich Village or San Francisco’s SoMa district, finding a coffeehouse that creates an oeuvre and owns it — instead of proffering over-roasted coffee and overpriced imitations of food — is next to impossible. But that’s all because you’re not looking right here in Las newbie CRED: Steven Vegas (Boca Park, to be Mason, brand strategist, ADHD exact), where Sambalatte connoisseur, and megadose serves world-class java for consumer of caffeine, has lived in Las Vegas for 15 months. the true enthusiast, freshly roasted, ground and brewed (French press, vacuum brew, chemex, aero press or single brew), not to mention tea, foodie salads, pastries flown in from Paris and palate-cleansing gelatos. All in an open, two-story space populated with communal teak tables, giving you plenty of room for the impromptu business meeting, understated art of the pickup, or just the opportunity to spread out with books, magazines and laptops. There’s also live Latin and jazz music on many nights, unobtrusive but substantive music the rest of the time, and an eclectic mix of cool, personable coffee-lovers (as customers, baristas and servers). When it comes time for my dictionary, Sambalatte has got first dibs on the word “oasis.” 750 S. Rampart Blvd. Suite 9, 272-2333, www.sambalatte.com Your guide to living in Southern Nevada

Your guide to living in Southern Nevada