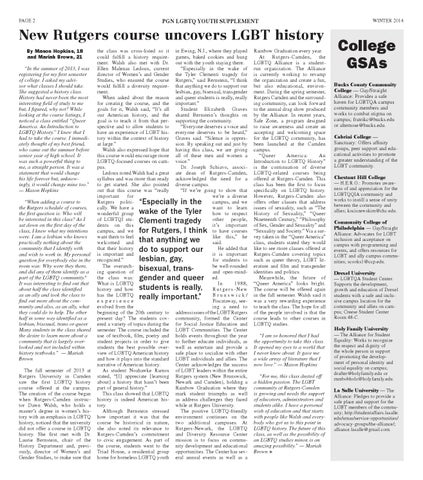 New Rutgers course uncovers LGBT history By Mason Hopkins, 18 and Mariah Brown, 21 “In the summer of 2013, I was registering for my first semester of college. I asked my advisor what classes I should take. She suggested a history class. History had never been the most interesting field of study to me but, I figured, why not? While looking at the course listings, I noticed a class entitled “Queer America: An Introduction to LGBTQ History.” I knew that I had to take the course. I immediately thought of my best friend, who came out the summer before senior year of high school. It was such a powerful thing to me, a straight person. It was a statement that would change his life forever but, unknowingly, it would change mine too.” — Mason Hopkins “When adding a course to the Rutgers schedule of courses, the first question is: Who will be interested in this class? As I sat down on the first day of the class, I knew what my intentions were. I am a lesbian who knows practically nothing about the community that I identify with and wish to work in. My personal question for everybody else in the room was: Why were they there, and did any of them identify as a part of the LGBTQ community? It was interesting to find out that about half the class identified as an ally and took the class to find out more about the community and also, as an ally, what they could do to help. The other half in some way identified as a lesbian, bisexual, trans or queer. Many students in the class shared the desire to learn more about a community that is largely overlooked and not included within history textbooks.” — Mariah Brown The fall semester of 2013 at Rutgers University in Camden saw the first LGBTQ history course offered at the campus. The creation of the course began when Rutgers-Camden instructor Dawn Walsh, who holds a master’s degree in women’s history with an emphasis in LGBTQ history, noticed that the university did not offer a course in LGBTQ history. She first met with Dr. Laurie Bernstein, chair of the History Department and, previously, director of Women’s and Gender Studies, to make sure that

the class was cross-listed so it could fulfill a history requirement. Walsh also met with Dr. Ellen Malenas Ledoux, current director of Women’s and Gender Studies, who ensured the course would fulfill a diversity requirement. When asked about the reason for creating the course, and the goals for it, Walsh said, “It’s all our American history, and the goal is to teach it from that perspective and to allow students to have an experience of LGBT history within the context of history at large.” Walsh also expressed hope that this course would encourage more LGBTQ-focused courses on campus. Ledoux noted Walsh had a great syllabus and was more than ready to get started. She also pointed out that this course was “really important for Rutgers politically. We have a wonderful group of LGBTQI students on this campus, and we want them to feel welcomed and that their history is important and recognized.” The overarching question of the class was: What is LGBTQ history and how has the LGBTQ experience evolved from the beginning of the 20th century to present day? The students covered a variety of topics during the semester. The course included the use of textbook, film, poetry and student projects in order to give students the best possible overview of LGBTQ American history and how it plays into the standard narrative of American history. As student Noahawke Ramos stated, “[I] appreciate [learning about] a history that hasn’t been part of general history.” This class showed that LGBTQ history is indeed American history. Although Bernstein stressed how important it was that the course be historical in nature, she also noted its relevance to Rutgers-Camden’s commitment to civic engagement. As part of the course, students went to the Triad House, a residential group home for homeless LGBTQ youth

in Ewing, N.J., where they played games, baked cookies and hung out with the youth staying there. “Especially in the wake of the Tyler Clementi tragedy for Rutgers,” said Bernstein, “I think that anything we do to support our lesbian, gay, bisexual, transgender and queer students is really, really important.” Student Elizabeth Graves shared Bernstein’s thoughts on supporting the community. “Everyone deserves a voice and everyone deserves to be heard,” Graves said. “Silence is oppression. By speaking out and just by having this class, we are giving all of these men and women a voice.” Dr. Joseph Schiavo, associate dean of Rutgers-Camden, acknowledged the need for a diverse campus. “If we’re going to show that we’re a diverse campus, and we want to learn how to respect other people, it’s important to have courses like this,” he said. He added that it is important for students to be well-rounded and open-minded. In 1988, Rutgers-New Brunswick/ Piscataway, seeing a need to address issues of the LGBT Rutgers community, formed the Center for Social Justice Education and LGBT Communities. The Center holds events throughout the year to further educate individuals, as well as entertain and provide a safe place to socialize with other LGBT individuals and allies. The Center acknowledges the success of LGBT leaders within the entire Rutgers system (New Brunswick, Newark and Camden), holding a Rainbow Graduation where they mark student triumphs as well as address challenges they faced while at Rutgers University. The positive LGBTQ-friendly environment continues on the two additional campuses. At Rutgers-Newark, the LGBTQ and Diversity Resource Center mission is to focus on community development and educational opportunities. The Center has several annual events as well as a

“Especially in the wake of the Tyler Clementi tragedy for Rutgers, I think that anything we do to support our lesbian, gay, bisexual, transgender and queer students is really, really important.”

Rainbow Graduation every year. At Rutgers-Camden, the LGBTQ Alliance is a studentrun organization. The Alliance is currently working to revamp the organization and create a fun, but also educational, environment. During the spring semester, Rutgers Camden and the surrounding community, can look forward to the annual drag show produced by the Alliance. In recent years, Safe Zone, a program designed to raise awareness and create an accepting and welcoming space for the LGBTQ community, has been launched at the Camden campus. “Queer America: An Introduction to LGBTQ History” is the continuation of diverse LGBTQ-related courses being offered at Rutgers-Camden. This class has been the first to focus specifically on LGBTQ history. However, Rutgers-Camden also offers other classes that address issues of sexuality, such as “The History of Sexuality,” “Queer Nineteenth Century,” “Philosophy of Sex, Gender and Sexuality” and “Sexuality and Society.” Via a survey taken in the “Queer America” class, students stated they would like to see more classes offered at Rutgers-Camden covering topics such as queer theory, LGBT literature and film and transgender identities and politics. Meanwhile, the future of “Queer America” looks bright. The course will be offered again in the fall semester. Walsh said it was a very rewarding experience to teach the class. The hope for all of the people involved is that the course leads to other courses in LGBTQ studies. “I am so honored that I had the opportunity to take this class. It opened my eyes to a world that I never knew about. It gave me a wide array of literature that I now love.” — Mason Hopkins “For me, this class dusted off a hidden passion. The LGBT community at Rutgers-Camden is growing and needs the support of educators, administrators and students alike. I have a personal wish of education and that starts with people like Walsh and everybody who got us to this point in LGBTQ history. The future of this class, as well as the possibility of an LGBTQ studies minor, is an amazing possibility.” — Mariah Brown ✮

— H.E.R.O.: Promotes awareness of and appreciation for the LGBTQQIA community and works to instill a sense of unity between the community and allies; kociszewskim@chc.edu.

Alliance: Advocates for LGBT inclusion and acceptance on campus with programming and events, and offers resources for LGBT and ally campus communities; scooks1@ccp.edu.

— LGBTQA Student Center: Supports the development, growth and education of Drexel students with a safe and inclusive campus location for the community and allies on campus; Creese Student Center Room 48-C.

— The Alliance for Student Equality: Works to recognize the respect and dignity of the whole person in support of promoting the development of personal identity and social equality on campus; drafter@holyfamily.edu or mmbobholz@holyfamily.edu.

La Salle University — The Alliance: Pledges to provide a safe place and support for the LGBT members of the community; http://studentaffairs.lasalle. edu/umas/service-opportunities/ advocacy-groups/the-alliance/; alliance.lasalle@gmail.com. 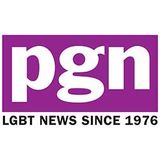