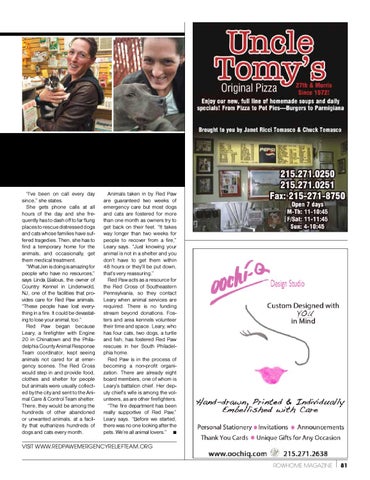 “I’ve been on call every day since,” she states. She gets phone calls at all hours of the day and she frequently has to dash off to far flung places to rescue distressed dogs and cats whose families have suffered tragedies. Then, she has to find a temporary home for the animals, and occasionally, get them medical treatment. “What Jen is doing is amazing for people who have no resources,” says Linda Bialous, the owner of Country Kennel in Lindenwold, NJ, one of the facilities that provides care for Red Paw animals. “These people have lost everything in a fire. It could be devastating to lose your animal, too.” Red Paw began because Leary, a firefighter with Engine 20 in Chinatown and the Philadelphia County Animal Response Team coordinator, kept seeing animals not cared for at emergency scenes. The Red Cross would step in and provide food, clothes and shelter for people but animals were usually collected by the city and sent to the Animal Care & Control Team shelter. There, they would be among the hundreds of other abandoned or unwanted animals, at a facility that euthanizes hundreds of dogs and cats every month.

Animals taken in by Red Paw are guaranteed two weeks of emergency care but most dogs and cats are fostered for more than one month as owners try to get back on their feet. “It takes way longer than two weeks for people to recover from a fire,” Leary says. “Just knowing your animal is not in a shelter and you don’t have to get them within 48 hours or they’ll be put down, that’s very reassuring.” Red Paw acts as a resource for the Red Cross of Southeastern Pennsylvania, so they contact Leary when animal services are required. There is no funding stream beyond donations. Fosters and area kennels volunteer their time and space. Leary, who has four cats, two dogs, a turtle and fish, has fostered Red Paw rescues in her South Philadelphia home. Red Paw is in the process of becoming a non-profit organization. There are already eight board members, one of whom is Leary’s battalion chief. Her deputy chief’s wife is among the volunteers, as are other firefighters. “The fire department has been really supportive of Red Paw,” Leary says. “Before we started, there was no one looking after the pets. We’re all animal lovers.” Q