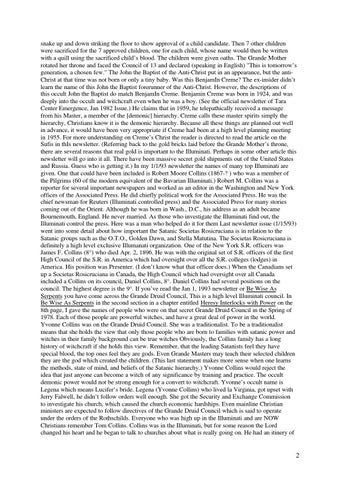 snake up and down striking the floor to show approval of a child candidate. Then 7 other children were sacrificed for the 7 approved children, one for each child, whose name would then be written with a quill using the sacrificed child’s blood. The children were given oaths. The Grande Mother rotated her throne and faced the Council of 13 and declared (speaking in English) "This is tomorrow’s generation, a chosen few." The John the Baptist of the Anti-Christ put in an appearance, but the antiChrist at that time was not born or only a tiny baby. Was this BenjamIn Creme? The ex-insider didn’t learn the name of this John the Baptist forerunner of the Anti-Christ. However, the descriptions of this occult John the Baptist do match BenjamIn Creme. Benjamin Creme was born in 1924, and was deeply into the occult and witchcraft even when he was a boy. (See the official newsletter of Tara Center Emergence, Jan 1982 Issue.) He claims that in 1959, he telepathically received a message from his Master, a member of the [demonic] hierarchy. Creme calls these master spirits simply the hierarchy, Christians know it is the demonic hierarchy. Because all these things are planned out well in advance, it would have been very appropriate if Creme had been at a high level planning meeting in 1955. For more understanding on Creme’s Christ the reader is directed to read the article on the Sufis in thIs newsletter. (Referring back to the gold bricks laid before the Grande Mother’s throne, there are several reasons that real gold is important to the Illuminati. Perhaps in some other article this newsletter will go into it all. There have been massive secret gold shipments out of the United States and Russia. Guess who is getting it.) In my 1/1/93 newsletter the names of many top Illuminati are given. One that could have been included is Robert Moore Collins (1867-? ) who was a member of the Pilgrims (60 of the modern equivalent of the Bavarian Illuminati.) Robert M. Collins was a reporter for several important newspapers and worked as an editor in the Washington and New York offices of the Associated Press. He did chiefly political work for the Associated Press. He was the chief newsman for Reuters (Illuminati controlled press) and the Associated Press for many stories coming out of the Orient. Although he was born in Wash., D.C., his address as an adult became Bournemouth, England. He never married. As those who investigate the Illuminati find out, the Illuminati control the press. Here was a man who helped do it for them Last newsletter issue (1/15/93) went into some detail about how important the Satanic Societas Rosicruciana is in relation to the Satanic groups such as the O.T.O., Golden Dawn, and Stella Matutina. The Societas Rosicruciana is definitely a high level exclusive Illumanati organization. One of the New York S.R. officers was James F. Collins (8°) who died Apr. 2, 1896. He was with the original set of S.R. officers of the first High Council of the S.R. in America which had oversight over all the S.R. colleges (lodges) in America. His position was Presenter. (I don’t know what that officer does.) When the Canadians set up a Societas Rosicruciana in Canada, the High Council which had oversight over all Canada included a Collins on its council, Daniel Collins, 8°. Daniel Collins had several positions on the council. The highest degree is the 9°. If you’ve read the Jan 1, 1993 newsletter or Be Wise As Serpents you have come across the Grande Druid Council, This is a high level Illuminati council. In Be Wise As Serpents in the second section in a chapter entitled Heresy Interlocks with Power on the 8th page, I gave the names of people who were on that secret Grande Druid Council in the Spring of 1978. Each of those people are powerful witches, and have a great deal of power in the world. Yvonne Collins was on the Grande Druid Council. She was a traditionalist. To be a traditionalist means that she holds the view that only those people who are born to families with satanic power and witches in their family background can be true witches Obviously, the Collins family has a long history of witchcraft if she holds this view. Remember, that the leading Satanists feel they have special blood, the top ones feel they are gods. Even Grande Masters may teach their selected children they are the god which created the children. (This last statement makes more sense when one learns the methods, state of mind, and beliefs of the Satanic hierarchy.) Yvonne Collins would reject the idea that just anyone can become a witch of any significance by training and practice. The occult demonic power would not be strong enough for a convert to witchcraft. Yvonne’s occult name is Legena which means Lucifer’s bride. Legena (Yvonne Collins) who lived la Virginia, got upset with Jerry Falwell, he didn’t follow orders well enough. She got the Security and Exchange Commission to investigate his church, which caused the church economic hardships. Even mainline Christian ministers are expected to follow directives of the Grande Druid Council which is said to operate under the orders of the Rothschilds. Everyone who was high up in the Illuminati and are NOW Christians remember Tom Collins. Collins was in the Illuminati, but for some reason the Lord changed his heart and he began to talk to churches about what is really going on. He had an itinery of Fritz Springmeier - Bloodlines of the Illuminati

I am pleased &amp; honored to present this book to those in the world who love the truth. This is a book for lovers of the Truth. This is a...

Fritz Springmeier - Bloodlines of the Illuminati

I am pleased &amp; honored to present this book to those in the world who love the truth. This is a book for lovers of the Truth. This is a...