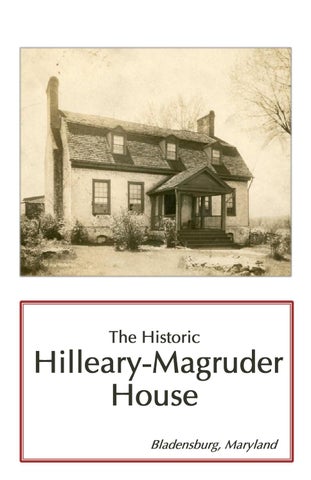 The Hilleary-Magruder House (or Magruder House), constructed in 1742, is probably the oldest building still standing in Bladensburg. Its architectural significance and deep links to local history and personalities justified its listing on the National Register of Historic Places since 1978. The house is the only 18th century stone gambrel-roofed house in Prince Georgeâ&amp;#x20AC;&amp;#x2122;s County. The walls are solid sandstone and the interior, spread over three floors, is finished with beautifully restored plasterwork and wood paneling. Now used for commercial space, much of the buildingâ&amp;#x20AC;&amp;#x2122;s historic fabric and significance have been preserved. It retains its place in the heart of the community of Bladensburg, despite the changes the house and the area have witnessed.

Riverside landscapes have long been favored as providing easy routes for travel and trade. This has attracted people to the Bladensburg area for over 8000 years. Recent archaeology revealed flaked stone tools and other materials belonging to people from the Early Archaic (8500 – 6000BC) all the way through to the Late Woodland (900 – 1600 AD) periods. Flaked tools found at the Later, Captain John Smith explored the ChesaMagruder House. State peake Bay, coming up the Anacostia River in Highway Administration 1608. Colonists expanded, encroaching on the

lands of Native American people, and when Prince George’s County was chartered in 1696, tobacco was the most important crop. Flooding of the Anacostia River is not a modern problem; clearing forestland to make way for farming increased flooding and silting of the river by the beginning of the 18th century. In 1742, the citizens of a small waterfront town near present-day Hyattsville complained that the river was so choked with silt and debris, ships could no longer dock at the port. In response, Bladensburg was founded and sixty one-acre lots were laid out. Lot 27 was bought by William Hilleary, a planter who lived 1787 tracing of the original Bladensburg plat with nearby. the Magruder House lot highlighted. Maryland

William Hilleary constructed the Magruder House in 1742, although he did not use it as a residence himself. The connection with tobacco continued when in 1764 the house was bought by Richard Henderson, the local representative for the John Glassford Co., based in Glasgow, Scotland.

Henderson arranged the import of goods to Bladensburg and the export of tobacco. A tobacco warehouse had been established in Bladensburg, marking it as a major regional center for trade. Planters pressed the tobacco into casks called hogsheads which they brought by boat or rolled over roads, drawn by horse or ox, to the warehouse. There, inspectors examined the weight and quality of tobacco; its sale was highly profitable and heavily regulated. At the port of Bladensburg, hogsheads were loaded onto ships bound for Europe or the West Indies. The ships returned, laden with slaves from Africa and finished goods such as textiles, porcelain, sugar and rum. Henderson’s status and wealth is perhaps indicated by his hosting George Washington for dinner at the Magruder House. Washington was en route to the Constitutional Convention held in Philadelphia during the hot summer of 1787.

The Hilleary-Magruder House was owned for a short time by Major David Ross, Jr. who commanded a Regiment in the Continental Army during the Revolutionary War. By this time, tobacco production had reached its zenith and trade began to shift away to Baltimore. Bladensburg became known for the health-giving waters of its spa spring. Many people passed through the town on the Baltimore-Washington Turnpike which was chartered in 1812 and completed through Bladensburg just after the British attack in 1814.

War broke out in 1812 and the Chesapeake Campaign covered much of Prince Georgeâ&amp;#x20AC;&amp;#x2122;s County. The British Navy advanced up the Patuxent River through Upper Marlboro to Bladensburg. British troops passed right in front of the Hilleary-Magruder House as they approached the new Turnpike bridge which American forces failed to destroy. They came under fire but crossed the river and attacked the US troops which, made up largely of militia, retreated hastily. After Commodore Joshua Barneyâ&amp;#x20AC;&amp;#x2122;s marines and flotilla men also finally fell back, the road to Washington was open. The British burned the White House, Capitol and other government buildings before returning to their ships. Tradition claims that the only civilian resistance in Bladensburg came from the Magruder House. That cannot be substantiated, but it is possible that the residence was used as a field hospital for wounded British soldiers; over eighty were left behind and tended to until their repatriation months later.

The Anacostia was progressively silting up and becoming unnavigable and the last large commercial ships left the port around 1840. However, a new transportation link arrived in 1835 in the form of the Washington branch of the Baltimore &amp; Ohio Railroad. At this time, the Hilleary-Magruder House was owned by Christopher C. Hyatt. He operated a successful general store in Bladensburg and later bought a tract of land north and across the river by the B&amp;O station. This land would become the city of Hyattsville.

The Hilleary-Magruder House had a number of owners and tenants until Dr. Archibald Magruder bought it in 1853. He lived in the house with his family and slaves and built a doctorâ&amp;#x20AC;&amp;#x2122;s office in front.

A Confederate Manual for Military Surgery, 1863

Magruder sympathized with the south and family history relates that he hid medical supplies in his house and cared for injured Confederate soldiers. He was imprisoned for this but quickly released as he was the only doctor in Bladensburg.

Bladensburgâ&amp;#x20AC;&amp;#x2122;s time as an international port town had come and gone and its important position on the post road was becoming eroded by the advent of the B&amp;O railroad. Towards the end of the eighteenth century through to the twentieth century, the town is described as a sleepy, quiet place. After the Magruders left the house, it was occupied by tenants of prominent Bladensburg lawyer Marion Duckett, and then owned and lived in by Baxter and Alice Denny.

New life was breathed into Bladensburg as streetcars were expanding throughout Washington. An electric streetcar line from H Street NE to Bladensburg opened in 1910, terminating very close to the Magruder House. Around this time, the Baltimore Washington Boulevard (US Route 1) was paved and passed right through Bladensburg. These new transportation links spurred a fresh wave of housing development in the town. This new transportation infrastructure brought a huge increase in automobile traffic and related industries to Bladensburg. The centuries-old problem of flooding continued until the 1950â&amp;#x20AC;&amp;#x2122;s, a period that marked more change in the history of the HillearyMagruder House.

In the 1950’s, several large road and flooding-related projects began, including the dredging, rerouting and building of flood defenses along the Anacostia by the Army Corps of Engineers. Development and industrialization of Bladensburg continued, and many of the remaining 17th and 18th century houses were razed. In 1954 the Hilleary-Magruder House and the nearby Market Master’s House were acquired by the State Highway Administration for demolition to make room for the expansion of Kenilworth Avenue. However, the Mayor of Bladensburg, Susanna Cristofane, started a Susanna Cristofane in front of the Hilleary-Magruder House. The campaign to save the house and the Sentinel, April 26, 1976 Market Master’s House that was ultimately successful. Subsequently, the house languished as an antiques store, although its architectural significance and value to local history was recognized and it was listed in the National Register of Historic Places and as a Prince The Hilleary- Magruder House as an antiques store, 1970’s. George’s County Historic Site.

Bladensburg and Local History The historical research report prepared for the State Highway Administration contains a history of the Hilleary-Magruder House and two of the other historic sites in the area, Market Master’s House and the George Washington House/Indian Queen. It is available from: battleofbladensburg1812.com/Bladensburg/bladensburg-history/ Bladensburg_Historical_Research_Project.pdf Other local sites include Bostwick and St. Paul&#39;s (Free Hope) Baptist Church. A list of all the historic places in Prince George’s County, the Illustrated Inventory of Historic Sites, can be downloaded from the County Planning Department: www.pgplanning.org/Projects/Ongoing_Plans_and_ Projects /Historic_Preservation/Illustrated_Inventory.htm

Archaeology battleofbladensburg1812.com/Bladensburg An interactive site on what was found at the recent archaeological digs. Provides links to in-depth articles on Native American history, transportation and maritime history. bladenarch.blogspot.com Blog from University of Maryland that chronicled the archaeological excavations as they happened.

An outline of the history of the Hilleary-Magruder House, Bladensburg, Maryland