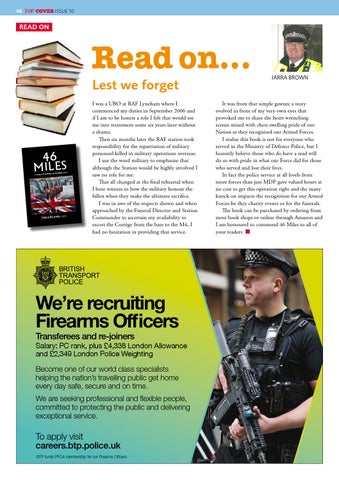 Read on… Lest we forget

46 miles ling Respect riation and Humb A Journey of Repat

them, Age shall not weary n. nor the years condem

not old, They shall grow grow old: as we that are left

came to show s of this town it had been re fitting even eous, modest er, just a spontan name of duty. mate price in the res of the Iraq ys and wherefo strategies. It and government s rippled n and whose emotiondedicated It is ect into Oxford. country, paid heir Queen and , every occasion e grieving on be forgotten. diers will never

s– nded of the hundred e Wiltshir beautiful rural its green t hiking across resting ey were lifeless, bells of St gust 2011 the s of resident the mes than moment represented the Street. m entered the High

I was a UBO at RAF Lyneham where I commenced my duties in September 2006 and if I am to be honest a role I felt that would see me into retirement some six years later without a drama. Then six months later the RAF station took responsibility for the repatriation of military personnel killed in military operations overseas. I use the word military to emphasise that although the Station would be highly involved I saw no role for me. That all changed at the final rehearsal when I bore witness to how the military honour the fallen when they make the ultimate sacrifice. I was in awe of the respects shown and when approached by the Funeral Director and Station Commander to ascertain my availability to escort the Cortège from the base to the M4, I had no hesitation in providing that service.

Become one of our world class specialists helping the nation’s travelling public get home every day safe, secure and on time. We are seeking professional and flexible people, committed to protecting the public and delivering exceptional service.

It was from that simple gesture a story evolved in front of my very own eyes that provoked me to share the heart wrenching scenes mixed with chest swelling pride of our Nation as they recognised our Armed Forces. I realise this book is not for everyone who served in the Ministry of Defence Police, but I honestly believe those who do have a read will do so with pride in what our Force did for those who served and lost their lives. In fact the police service at all levels from more forces than just MDP gave valued hours at no cost to get this operation right and the many knock on impacts the recognition for our Armed Forces be they charity events or for the funerals. The book can be purchased by ordering from most book shops or online through Amazon and I am honoured to commend 46 Miles to all of your readers  ■ See the latest from the PFOA!

See the latest from the PFOA!