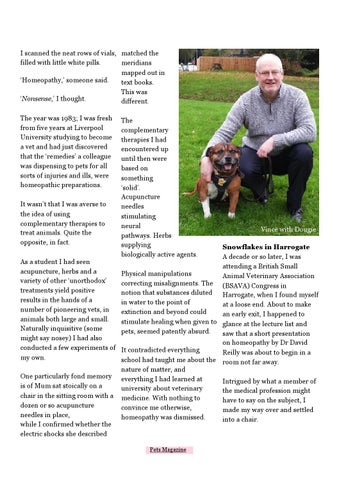 I scanned the neat rows of vials, matched the filled with little white pills. meridians mapped out in ‘Homeopathy,’ someone said. text books. This was ‘Nonsense,’ I thought. different. The year was 1983; I was fresh from five years at Liverpool University studying to become a vet and had just discovered that the ‘remedies’ a colleague was dispensing to pets for all sorts of injuries and ills, were homeopathic preparations. It wasn’t that I was averse to the idea of using complementary therapies to treat animals. Quite the opposite, in fact.

The complementary therapies I had encountered up until then were based on something ‘solid’. Acupuncture needles stimulating neural pathways. Herbs supplying biologically active agents.

Snowflakes in Harrogate A decade or so later, I was As a student I had seen attending a British Small acupuncture, herbs and a Physical manipulations Animal Veterinary Association variety of other ‘unorthodox’ correcting misalignments. The (BSAVA) Congress in treatments yield positive notion that substances diluted Harrogate, when I found myself results in the hands of a in water to the point of at a loose end. About to make number of pioneering vets, in extinction and beyond could an early exit, I happened to animals both large and small. stimulate healing when given to glance at the lecture list and Naturally inquisitive (some pets, seemed patently absurd. saw that a short presentation might say nosey) I had also on homeopathy by Dr David conducted a few experiments of It contradicted everything Reilly was about to begin in a my own. school had taught me about the room not far away. nature of matter, and One particularly fond memory everything I had learned at Intrigued by what a member of is of Mum sat stoically on a university about veterinary the medical profession might chair in the sitting room with a medicine. With nothing to have to say on the subject, I dozen or so acupuncture convince me otherwise, made my way over and settled needles in place, homeopathy was dismissed. into a chair. while I confirmed whether the electric shocks she described 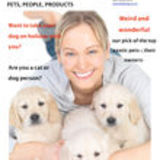