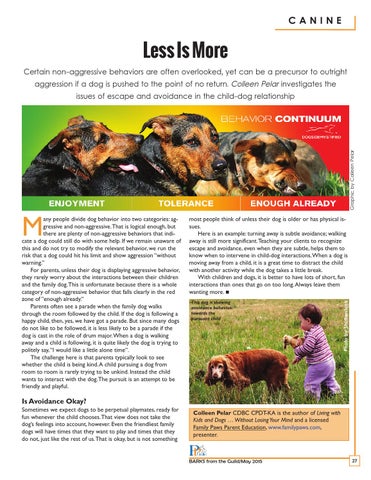 Certain non-aggressive behaviors are often overlooked, yet can be a precursor to outright aggression if a dog is pushed to the point of no return. Colleen Pelar investigates the

issues of escape and avoidance in the child-dog relationship

most people think of unless their dog is older or has physical issues. Here is an example: turning away is subtle avoidance; walking away is still more significant. Teaching your clients to recognize escape and avoidance, even when they are subtle, helps them to know when to intervene in child-dog interactions. When a dog is moving away from a child, it is a great time to distract the child with another activity while the dog takes a little break. With children and dogs, it is better to have lots of short, fun interactions than ones that go on too long. Always leave them wanting more. n

Sometimes we expect dogs to be perpetual playmates, ready for fun whenever the child chooses. That view does not take the dog’s feelings into account, however. Even the friendliest family dogs will have times that they want to play and times that they do not, just like the rest of us. That is okay, but is not something

Colleen Pelar CDBC CPDT-KA is the author of Living with Kids and Dogs … Without Losing Your Mind and a licensed Family Paws Parent Education, www.familypaws.com, presenter.

This dog is showing avoidance behavior towards the pursuant child

any people divide dog behavior into two categories: aggressive and non-aggressive. That is logical enough, but there are plenty of non-aggressive behaviors that indicate a dog could still do with some help. If we remain unaware of this and do not try to modify the relevant behavior, we run the risk that a dog could hit his limit and show aggression “without warning.” For parents, unless their dog is displaying aggressive behavior, they rarely worry about the interactions between their children and the family dog. This is unfortunate because there is a whole category of non-aggressive behavior that falls clearly in the red zone of “enough already.” Parents often see a parade when the family dog walks through the room followed by the child. If the dog is following a happy child, then, yes, we have got a parade. But since many dogs do not like to be followed, it is less likely to be a parade if the dog is cast in the role of drum major. When a dog is walking away and a child is following, it is quite likely the dog is trying to politely say, “I would like a little alone time”. The challenge here is that parents typically look to see whether the child is being kind. A child pursuing a dog from room to room is rarely trying to be unkind. Instead the child wants to interact with the dog. The pursuit is an attempt to be friendly and playful.

Published quarterly and managed by Susan Nilson, "BARKS from the Guild" presents a collection of valuable business and technical articles as well as reviews and news stories pertinent to our industry. BARKS is the official publication of the Pet Professional Guild and is distributed free to all members.