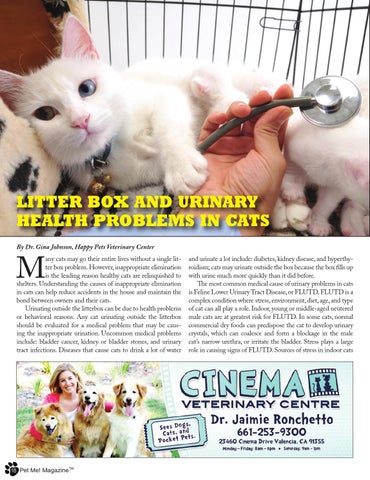 any cats may go their entire lives without a single litter box problem. However, inappropriate elimination is the leading reason healthy cats are relinquished to shelters. Understanding the causes of inappropriate elimination in cats can help reduce accidents in the house and maintain the bond between owners and their cats. Urinating outside the litterbox can be due to health problems or behavioral reasons. Any cat urinating outside the litterbox should be evaluated for a medical problem that may be causing the inappropriate urination. Uncommon medical problems include: bladder cancer, kidney or bladder stones, and urinary tract infections. Diseases that cause cats to drink a lot of water

and urinate a lot include: diabetes, kidney disease, and hyperthyroidism; cats may urinate outside the box because the box fills up with urine much more quickly than it did before. The most common medical cause of urinary problems in cats is Feline Lower Urinary Tract Disease, or FLUTD. FLUTD is a complex condition where stress, environment, diet, age, and type of cat can all play a role. Indoor, young or middle-aged neutered male cats are at greatest risk for FLUTD. In some cats, normal commercial dry foods can predispose the cat to develop urinary crystals, which can coalesce and form a blockage in the male cat’s narrow urethra, or irritate the bladder. Stress plays a large role in causing signs of FLUTD. Sources of stress in indoor cats 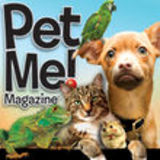 A publication focused on rescue, adoption, and the welfare of companion animals. Features in the current issue include: Desert Dogs ( stray...

A publication focused on rescue, adoption, and the welfare of companion animals. Features in the current issue include: Desert Dogs ( stray...