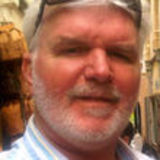 I was baptised in the Holy Spirit in November 1989 in the South of Spain and miraculously converted. Nancy, my wife and I, registered our charity, The Way Christian Ministries, in 1997. I pioneered and pastored a church in Drumchapel, Glasgow, Scotland for eight years during which time (the year 2000) I became an ordained minister. In 2005 the Lord released me into an apostolic ministry and I now I go on missions all around the world. We now minister, by many means, to many thousands of people every day. Our aim is to; make disciples out of Christians in fulfilment of the Great Commission. We have a Christian training course called Training for Life that is used globally in our Training for Life Centres including Scotland. For more information follow this link: http://www.thewaycm.com/