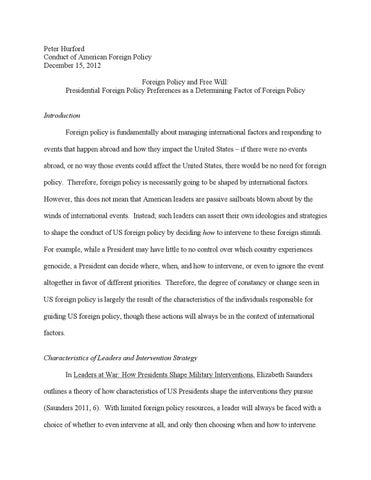 Peter Hurford Conduct of American Foreign Policy December 15, 2012 Foreign Policy and Free Will: Presidential Foreign Policy Preferences as a Determining Factor of Foreign Policy Introduction Foreign policy is fundamentally about managing international factors and responding to events that happen abroad and how they impact the United States â&amp;#x20AC;&amp;#x201C; if there were no events abroad, or no way those events could affect the United States, there would be no need for foreign policy. Therefore, foreign policy is necessarily going to be shaped by international factors. However, this does not mean that American leaders are passive sailboats blown about by the winds of international events. Instead; such leaders can assert their own ideologies and strategies to shape the conduct of US foreign policy by deciding how to intervene to these foreign stimuli. For example, while a President may have little to no control over which country experiences genocide, a President can decide where, when, and how to intervene, or even to ignore the event altogether in favor of different priorities. Therefore, the degree of constancy or change seen in US foreign policy is largely the result of the characteristics of the individuals responsible for guiding US foreign policy, though these actions will always be in the context of international factors. Characteristics of Leaders and Intervention Strategy In Leaders at War: How Presidents Shape Military Interventions, Elizabeth Saunders outlines a theory of how characteristics of US Presidents shape the interventions they pursue (Saunders 2011, 6). With limited foreign policy resources, a leader will always be faced with a choice of whether to even intervene at all, and only then choosing when and how to intervene.

Saunders argues that interventions are shaped by how the leader perceives threat – distinguishing between internally-focused leaders who see internal organizations of states as threatening and externally-focused leaders who see threats in terms of states’ foreign and security policies regardless of how they are organized domestically (Saunders 2011, 5). Furthermore, Saunders distinguishes between types of interventions that are transformative, or seek to change the domestic affairs of a country at the national and/or local level, and non-transformative interventions which do not, arguing that internally-focused leaders will pursue transformative interventions to alleviate the threat from badly organized states, whereas externally-focused leaders will pursue non-transformative strategies because they are unconcerned with internal organization (Saunders 2011, 5). According to Saunders, the variation in causal beliefs among each president is the dominant explanation for the variation in approaches to foreign intervention (Saunders 2011, 9 &amp; 29), and thus constancy or change in US foreign policy will largely be a result of changes among Presidents in their causal beliefs. Continuity and Choice in the Vietnam War Much is made out of the existence of continuity between Presidential administrations, especially on war policy – Presidents seem willing to follow the lead and advice from the previous President, to reduce the amount of sharp changes in policy with the onset of a new Administration. However, tracing out the war in Vietnam, shared by four different presidential administrations – Eisenhower, Kennedy, Johnson, and Nixon – does show variation in foreign policy that results from administrations changing in their ideologies and causal beliefs. Once the French started losing control of Vietnam in the early 1950s, Eisenhower did not initially want to intervene directly, but did decide to support Diem and South Vietnam with indirect support, citing the need to defend against North Vietnamese aggression out of fear of his

newly coined “Domino Theory”, which means that the fall of Vietnam could lead to the spread of communism elsewhere, like one domino pushing the other (Saunders 2011, 72-73). This can be contrasted with the decisions of Kennedy, who chose to depart from Eisenhower and intervene in Vietnam directly and moreover concerned himself with a counterinsurgency strategy that addressed the local and internal conditions of Vietnam through the “Strategic Hamlet Program” (Saunders 2011, 122-123), distinct from the non-transformative suggestions of “conventional warfare” from the NSC (Saunders 2011, 120-121) and distinct from Eisenhower’s decision to not invade (Saunders 2011, 118-119). By not only choosing whether or not to intervene in Vietnam but how that intervention would take place, Kennedy was able to assert his internally-focused preferences for transformative interventions. Owing to how Kennedy could have easily chosen a different, more conventional intervention strategy, it was Kennedy’s beliefs that shaped US foreign policy in Vietnam. This can be seen again in the transition from Kennedy to Johnson. While Johnson did deliberately desired to have continuity with Kennedy’s administration (Saunders 2011, 164) and the escalation of situation in Vietnam constrained Johnson’s options, the remaining options opened still gave Johnson enough choice to show his foreign policy preferences, and he chose to eschew transformative strategies (Saunders 2011, 167-168) or calls to withdraw from Vietnam (Thompson 2009, 204), even viewing progress in the war as mutually exclusive with transformative strategies (Saunders 2011, 168). However, he faced a choice – he could have chosen to reject General Westmoreland’s request for extra troops (Thompson 2009, 217). By choosing one way instead of another, Johnson shows how his preferences can steer the future of US policy in Vietnam.

This conventional warfare kept up until another change in strategy was seen by Richard Nixon, who kept the same external-focus as Johnson (Saunders 2011, 15), but chose to begin withdrawing from Vietnam (Geipel 1998, 27-28), facing changes in public mood and a popular anti-war movement (Geipel 1998, 4). However, Nixon did not withdraw immediately, instead choosing to pursue negotiations while keeping the war open (Geipel 1998, 11-12) and pursue non-transformative intervention in Cambodia (Geipel 1998, 7-8). Nixon could have withdrawn at essentially any point, or drawn out the war even further while waiting for more a more favorable negotiation, or eschewed secret negotiations altogether, thus showing Nixon had open options and used his preferences to navigate them. Choices and Counterfactual Theory in Iraq While tracing the changes of strategy in Vietnam reveals that differences in Presidential approaches to interventions changes the interventions that US will take, another method that can be relied upon is counterfactual analysis. In Explaining the Iraq War: Counterfactual Theory, Logic, and Evidence, Frank P. Harvey explains counterfactual analysis as a way to make “small, plausible changes in reality” that can be used to explore “what might have happened”, allowing hypotheticals to be used to tease out the causal effects of history (Harvey 2012, 23-24). Essentially, Saunders’s theory relies on counterfactuals without mentioning them by name, arguing that if various Presidents had different causal beliefs, or a different President had been in power with different beliefs facing the same circumstances, the scope of US interventions would have been different. Harvey’s book sets out to argue that had Al Gore won the election instead of George W. Bush, contrary to common wisdom, the Iraq War still would have unfolded more or less the same (Harvey 2012, 21). Harvey argues that instead of the common wisdom of Iraq as manufactured

by Republicans and Bush as beholden to an extreme ideology, the Iraq War was actually a bipartisan approach that was supported by Democrats (Harvey 2012, 141-146) and that Gore’s speeches reveal him as having very similar intentions for intervening in Iraq (Harvey 2012, 6876). This is relevant to the role of leaders in determining US foreign policy because of the approach that Harvey takes – showing that Gore has similar intervention preferences to Bush, thus implying that those intervention preferences have some impact on whether or not Gore or Bush would have intervened in Iraq. Conclusion Overall, while it is undeniable that US foreign policy has been organized around significant international events – with no USSR or communism abroad, there would be no Cold War, Vietnam War, or Korean War – there still is a clear role for leaders. While leaders face constraints based on international events and pressures at home – a President can’t just invade England because he doesn’t like the Queen’s hairstyle – leaders still have enough open options to leave room for a reasonable amount of choice that must be navigated by the leader’s actual preferences. Tracing of the Vietnam War shows differences in approaches based on the causal beliefs and intervention preferences of the President in question, and also showed that Presidents often had several open options to choose from, and this is backed up by Harvey’s counterfactual analysis of the Iraq War. Eisenhower, Johnson, Nixon, and other Presidents all faced open options in their Presidencies, and the reason they went unchosen was largely because of the influence of the strategies Eisenhower and Kennedy respectfully chose to implement. We can thus reject a theory of international determinism that casts Presidents as helpless reactionaries powerless to steer foreign policy, and assert that Presidential preferences matter for foreign policy.

Foreign policy is fundamentally about managing international factors and responding to events that happen abroad and how they impact the United States – if there were no events abroad, or no way those events could affect the United States, there would be no need for foreign policy. Therefore, foreign policy is necessarily going to be shaped by international factors. However, this does not mean that American leaders are passive sailboats blown about by the winds of international events. Instead; such leaders can assert their own ideologies and strategies to shape the conduct of US foreign policy by deciding how to intervene to these foreign stimuli. For example, while a President may have little to no control over which country experiences genocide, a President can decide where, when, and how to intervene, or even to ignore the event altogether in favor of different priorities. 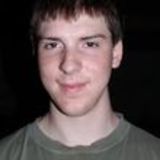