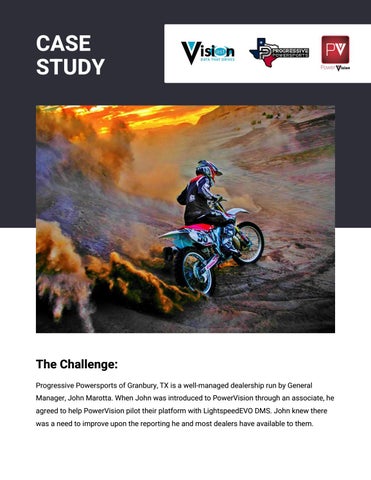 The Challenge: Progressive Powersports of Granbury, TX is a well-managed dealership run by General Manager, John Marotta. When John was introduced to PowerVision through an associate, he agreed to help PowerVision pilot their platform with LightspeedEVO DMS. John knew there was a need to improve upon the reporting he and most dealers have available to them.

The Process: The exercise began with integrating with the DMS for each of Progressive’s two locations and importing 12 months of historical data. As our teams reviewed deal data for major units in both sales and finance, John began to modify the way deals were recorded in his DMS. As we refined the data, the PowerVision reporting was becoming increasingly accurate, and John offered to and built a bill of sale set-up, so other dealers could easily walk through the process he was going through and reap the same rewards he was.

The Result: Three months into the project, John Marotta reports that as a direct result of leveraging the data in PowerVision, he has been able to significantly increase his dealership’s profit. His finance department has increased their PVR by more than $300 per transaction and increased the number of deals financed from 25% to over 50%, resulting in over $30,000 of additional profit each month, simply by knowing what the numbers are and leveraging them with his team.

A Note From John Marotta: “I was skeptical at first. I didn’t think it was possible to get accurate reporting through Lightspeed integration. Furthermore, I didn’t need another software program to tell me what I already knew. After some operational process changes, we found the data to be accurate. When I was able to trust the data, I quickly realized that I was being reactive in my management decisions and found that PowerVision gave me the opportunity to steer my sales and finance team early in the trends that were identified. Rather than looking back at a month of sales data, we are now analyzing data on demand!” A quick overview of 2 power sports locations in Texas, Progressive Powersports of Granbury and Arlington, detailing their pilot of the Power...

A quick overview of 2 power sports locations in Texas, Progressive Powersports of Granbury and Arlington, detailing their pilot of the Power...