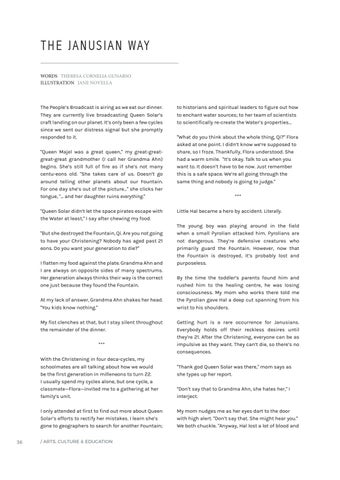 The People’s Broadcast is airing as we eat our dinner. They are currently live broadcasting Queen Solar’s craft landing on our planet. It’s only been a few cycles since we sent our distress signal but she promptly responded to it. &quot;Queen Majel was a great queen,&quot; my great-greatgreat-great grandmother (I call her Grandma Ahn) begins. She’s still full of fire as if she’s not many centu-eons old. &quot;She takes care of us. Doesn’t go around telling other planets about our Fountain. For one day she’s out of the picture...&quot; she clicks her tongue, &quot;... and her daughter ruins everything.&quot; &quot;Queen Solar didn’t let the space pirates escape with the Water at least,&quot; I say after chewing my food. &quot;But she destroyed the Fountain, Qi. Are you not going to have your Christening? Nobody has aged past 21 eons. Do you want your generation to die?&quot; I flatten my food against the plate. Grandma Ahn and I are always on opposite sides of many spectrums. Her generation always thinks their way is the correct one just because they found the Fountain. At my lack of answer, Grandma Ahn shakes her head. &quot;You kids know nothing.&quot; My fist clenches at that, but I stay silent throughout the remainder of the dinner. *** With the Christening in four deca-cycles, my schoolmates are all talking about how we would be the first generation in milleneons to turn 22. I usually spend my cycles alone, but one cycle, a classmate—Flora—invited me to a gathering at her family’s unit. I only attended at first to find out more about Queen Solar’s efforts to rectify her mistakes. I learn she’s gone to geographers to search for another Fountain; 36

to historians and spiritual leaders to figure out how to enchant water sources; to her team of scientists to scientifically re-create the Water’s properties... &quot;What do you think about the whole thing, Qi?&quot; Flora asked at one point. I didn’t know we’re supposed to share, so I froze. Thankfully, Flora understood. She had a warm smile. &quot;It’s okay. Talk to us when you want to. It doesn’t have to be now. Just remember this is a safe space. We’re all going through the same thing and nobody is going to judge.&quot; *** Little Hal became a hero by accident. Literally. The young boy was playing around in the field when a small Pyrolian attacked him. Pyrolians are not dangerous. They’re defensive creatures who primarily guard the Fountain. However, now that the Fountain is destroyed, it’s probably lost and purposeless. By the time the toddler’s parents found him and rushed him to the healing centre, he was losing consciousness. My mom who works there told me the Pyrolian gave Hal a deep cut spanning from his wrist to his shoulders. Getting hurt is a rare occurrence for Janusians. Everybody holds off their reckless desires until they’re 21. After the Christening, everyone can be as impulsive as they want. They can’t die, so there’s no consequences. &quot;Thank god Queen Solar was there,&quot; mom says as she types up her report. &quot;Don’t say that to Grandma Ahn, she hates her,&quot; I interject. My mom nudges me as her eyes dart to the door with high alert. &quot;Don’t say that. She might hear you.&quot; We both chuckle. &quot;Anyway, Hal lost a lot of blood and 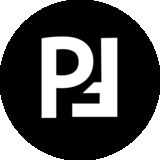