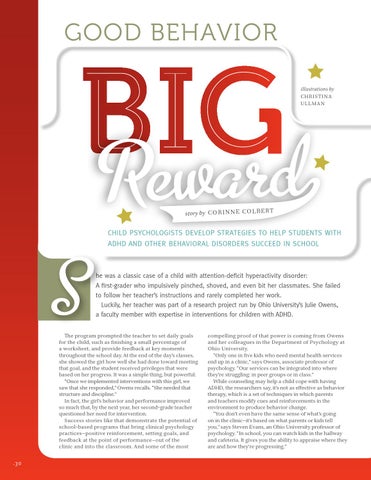 he was a classic case of a child with attention-deficit hyperactivity disorder: A first-grader who impulsively pinched, shoved, and even bit her classmates. She failed to follow her teacher’s instructions and rarely completed her work. Luckily, her teacher was part of a research project run by Ohio University’s Julie Owens, a faculty member with expertise in interventions for children with ADHD. The program prompted the teacher to set daily goals for the child, such as finishing a small percentage of a worksheet, and provide feedback at key moments throughout the school day. At the end of the day’s classes, she showed the girl how well she had done toward meeting that goal, and the student received privileges that were based on her progress. It was a simple thing, but powerful. “Once we implemented interventions with this girl, we saw that she responded,” Owens recalls. “She needed that structure and discipline.” In fact, the girl’s behavior and performance improved so much that, by the next year, her second-grade teacher questioned her need for intervention. Success stories like that demonstrate the potential of school-based programs that bring clinical psychology practices—positive reinforcement, setting goals, and feedback at the point of performance—out of the clinic and into the classroom. And some of the most

compelling proof of that power is coming from Owens and her colleagues in the Department of Psychology at Ohio University. “Only one in five kids who need mental health services end up in a clinic,” says Owens, associate professor of psychology. “Our services can be integrated into where they’re struggling: in peer groups or in class.” While counseling may help a child cope with having ADHD, the researchers say, it’s not as effective as behavior therapy, which is a set of techniques in which parents and teachers modify cues and reinforcements in the environment to produce behavior change. “You don’t even have the same sense of what’s going on in the clinic—it’s based on what parents or kids tell you,” says Steven Evans, an Ohio University professor of psychology. “In school, you can watch kids in the hallway and cafeteria. It gives you the ability to appraise where they are and how they’re progressing.” 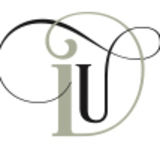