POLAR EXPRESS: TO THE ARCTIC BY TRAIN 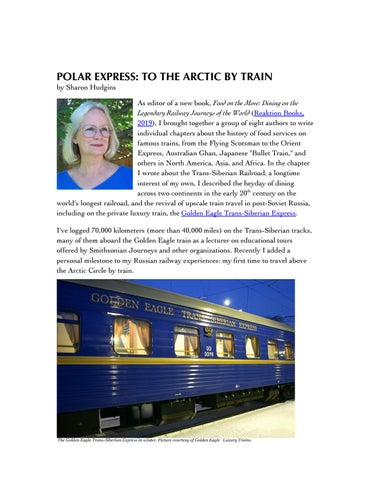 POLAR EXPRESS: TO THE ARCTIC BY TRAIN by Sharon Hudgins As editor of a new book, Food on the Move: Dining on the Legendary Railway Journeys of the World (Reaktion Books, 2019), I brought together a group of eight authors to write individual chapters about the history of food services on famous trains, from the Flying Scotsman to the Orient Express, Australian Ghan, Japanese &quot;Bullet Train,&quot; and others in North America, Asia, and Africa. In the chapter I wrote about the Trans-Siberian Railroad, a longtime interest of my own, I described the heyday of dining across two continents in the early 20th century on the world&#39;s longest railroad, and the revival of upscale train travel in post-Soviet Russia, including on the private luxury train, the Golden Eagle Trans-Siberian Express. I&#39;ve logged 70,000 kilometers (more than 40,000 miles) on the Trans-Siberian tracks, many of them aboard the Golden Eagle train as a lecturer on educational tours offered by Smithsonian Journeys and other organizations. Recently I added a personal milestone to my Russian railway experiences: my first time to travel above the Arctic Circle by train.

Not many rail lines run to the Arctic, and few people think of taking a vacation there in the middle of winter. But this tour on the Golden Eagle train, organized by Smithsonian Journeys, did just that. What a way to celebrate New Year&#39;s Eve on December 31st and Russian Orthodox Christmas on January 7th! We started in Moscow, the capital city joyously decorated for the holidays. Red Square was ablaze with lights, huge evergreen trees sparkled with ornaments, and shoppers bought gifts at open-air holiday markets while devouring pine-nut pancakes and hot spiced wine in the snow. To the accompaniment of a Russian brass band, we boarded the Golden Eagle train in Moscow and headed toward the historic towns of Vladimir and Suzdal, on Russia&#39;s &#39;Golden Ring&#39; of medieval churches and monasteries, some of them UNESCO World Heritage Sites. Near the small town of Bogolyubovo, after a special service at a lovely 12th-century church, we bundled up and sped on horse-drawn sleighs to a snowy field in the countryside, to welcome in the New Year with plenty of vodka, champagne, and cognac as we danced to Russian folk music and fireworks lit up the sky.

Meals on the Golden Eagle train, served in two elegant dining carriages gaily decorated for the holiday season, were as delicious as I&#39;d previously written about in

Food on the Move. The breakfast buffet included smoked salmon, bliny, caviar, and champagne (for early-morning indulgers), as well as hot breakfasts of bacon, eggs, and Russian specialties cooked to order. Lunch and dinner featured three or four coursesâ&amp;#x20AC;&amp;#x201D;a selection of colorful starters, followed by soul-warming soups, main dishes of meat or fish (with a vegetarian option, too), and tempting desserts, all beautifully plated on Golden Eagle&#39;s bespoke porcelain. Classic Russian dishes such as baked sturgeon, chicken Kiev, stuffed cabbage, and steamy borscht were also included on the menus. Fortified with fine food, we rode north from the Golden Ring, across the Arctic Circle to Murmansk, the largest Russian city in the Arctic, famous as the port where Western allies shipped supplies to Russia during World War I (and where allied troops occupied the city from 1918-1920 during Russia&#39;s civil war); where Arctic convoys of the Allied powers shipped muchneeded weapons and supplies to the Soviet Union in World War II; and where the Soviets based their Arctic submarine fleet during the Cold War. Historic church in Suzdal on the &#39;Golden Ring&#39; in Russia. Photo by Sharon Hudgins.

A bus ride from Murmansk then took us across the border to Norway, to the town of Kirkenes, in search of the Northern Lights that illuminate the night sky in winter. But a persistent cloud cover blocked our view. No matter, though, because we had plenty more to do: ice-fishing for king crabs on a frozen fjord (and feasting on them afterwards); dog-sledding with huskies in the dark; drinking Norwegian blueberry cocktails at the ice bar in the unique Snow Hotel; and feeding moss and lichens to friendly reindeer. Back on the train in Russia, we headed south again, through winter landscapes that looked like scenes from Doctor Zhivago. Our final destination was St. Petersburg, Peter the Great&#39;s city of magnificent palaces, churches, and canals. On the last two days of the tour, we marveled at the sumptuous dĂŠcor of the Catherine Palace with its famous Amber Room; saw the imperial tombs of the Russian emperors and empresses, including those of the last tsar of Russia, Nicholas II, and his family, at the Peter and Paul Cathedral; and spent hours in the Hermitage, one of world&#39;s greatest (and largest) museums. Finally, the tour was topped off by a farewell dinner at the Vodka Museum Restaurant, a memorable meal featuring an upscale version of Russian salat Olivier, garnished with house-made mayonnaise, a quail egg, and two roasted quail legs; tender beef Stroganov (served Russianstyle, with potatoes, not rice or noodles); and lemon sorbet liberally doused with vodka. Pea soup with smoked meats in a rye bread bowl, in the dining car on the Golden Eagle Trans-Siberian Express. Photo by Sharon Hudgins.

Friends thought I was crazy to take a train trip to the Arctic in winter. But I&#39;ve lived through two winters in Siberia, and I love snow! And ever since childhood, I&#39;ve loved traveling by train, too. As the railway conductor said in the movie made from the classic children&#39;s book, The Polar Express: &quot;One thing about trains. It doesn&#39;t matter where they&#39;re going. What matters is deciding to get on.&quot; Sharon Hudgins is the editor of Food on the Move: Dining on the Legendary Railway Journeys of the World (Reaktion Books, 2019) and T-Bone Whacks and Caviar Snacks: Cooking with Two Texans in Siberia and the Russian Far East (University of North Texas Press, 2018). For more information about this tour, see https://www.smithsonianjourneys.org/tours/arctic-train/itinerary/

POLAR EXPRESS: TO THE ARCTIC BY TRAIN 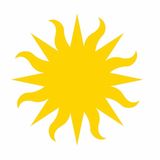