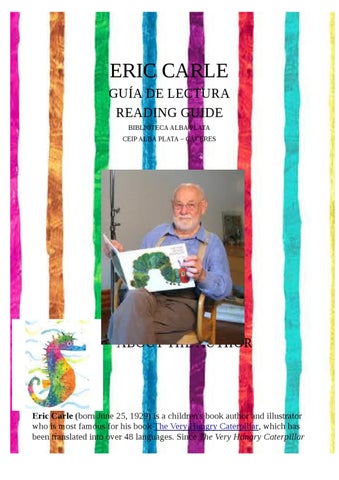 was published in 1969, Eric Carle has illustrated more than 70 books, many best sellers, most of which he also wrote, and more than 103 million copies of his books have sold around the whole world.

Fun and learning add up to a perfect 10 in this wordless counting book. Bright pictures tell the story: each car on the train has one more zoo animal than the one before it, and all arrive happily at the zoo in a dramatic finale.

This all-time favourite not only follows the very hungry caterpillar as it grows from egg to cocoon to beautiful butterfly, but also teaches the days of the week, counting, good nutrition and more.

Poetic but simple text and lovely collage pictures dramatize the life cycle of all plants, as one tiny seed grows into an enormous sunflower, which then produces more seeds in its turn.

A little mouse looks for a friend - and happily finds one just in time to save himself from a predator who has been hiding there all the time unseen, but in plain sight! A simple story on the universal theme of friendship.

A message in code starts Tim off on an exciting treasure hunt through a dark cave, an underground tunnel, and other strange places until he finds a happy surprise.

A boy’s pet cat has disappeared and he sets out to find it. In his search he meets many different kinds of cats, both wild and domesticated, before he finally discovers his own cat, who has a happy surprise for him. (Can you guess what it is?)

A grouchy ladybug is looking for a fight! But this bug soon learns the pleasures to be gained by cheerfulness and good manners.

Various farm animals try to divert a busy little spider from spinning her web, but she persists and produces a thing of both beauty and usefulness.

Beautiful illustrations are enhanced by dramatic fold-out pages in this moving and imaginative tale of a father’s love for his daughter. Monica’s father fulfils her request by bringing the moon down from the sky after it’s small enough to carry, but it continues to change in size.

In the story, a young cricket longs to make a sound by rubbing his wings together as many other crickets do. How he finally gets his wish is a romantic tale as well as a first look at natural history for the very young.

Funny, full-colour pictures show the foods featured for each day of the week. All the world’s children are invited on Sunday to come and eat it up.

In his search for companions, the firefly meets many other night creatures, but none is quite right—until the happy surprise at the very end when the illustration of a swarm of friendly fireflies shines a welcome in the night.

“I can do it!” is the confidence-building message of this book. “From Head to Toe” introduces the basic body parts and simple body movements, copying animals.

HEAR the beetle CLICK as it flips through the pages of this book and learns how to land on its feet!

Meet the little joey, whose kangaroo mother carries him in her pouch. Eric Carleâ&amp;#x20AC;&amp;#x2122;s colourful collages of animal babies with their caring and affectionate mothers offer small readers visual delight as well as comforting reassurance.

Panda Bear, Panda Bear, What Do You See? is told from the point of view of endangered creatures, and one dreaming child; each page a tribute to wild animals and their freedom.

Mister Seahorse and fellow fish fathers share their stories while camouflaged creatures bear witness to the conversation between fathers with fins.

10 Little Rubber Ducks fall overboard and land on shores all around the world. Inspired by the true story of these ducks at sea, Eric Carle has imagined their voyage in the wide open waters and the creatures they meet who live in and around the ocean.