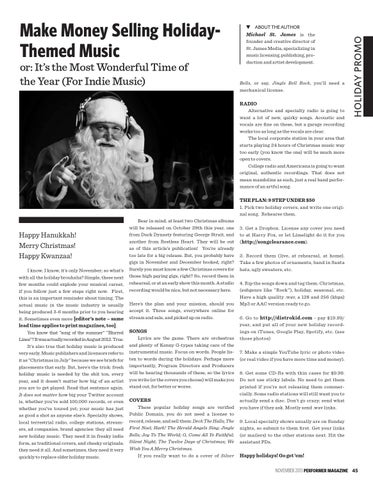 or: It’s the Most Wonderful Time of the Year (For Indie Music)

ABOUT THE AUTHOR Michael St. James is the founder and creative director of St. James Media, specializing in music licensing, publishing, production and artist development.

Bells, or say, Jingle Bell Rock, you’ll need a mechanical license. RADIO Alternative and specialty radio is going to want a lot of new, quirky songs. Acoustic and vocals are fine on these, but a garage recording works too as long as the vocals are clear. The local corporate station in your area that starts playing 24 hours of Christmas music way too early (you know the one) will be much more open to covers. College radio and Americana is going to want original, authentic recordings. That does not mean mandolins as such, just a real band performance of an artful song.

Happy Hanukkah! Merry Christmas! Happy Kwanzaa! I know, I know, it’s only November; so what’s with all the holiday brouhaha? Simple, these next few months could explode your musical career, if you follow just a few steps right now. First, this is an important reminder about timing. The actual music in the music industry is usually being produced 3-6 months prior to you hearing it. Sometimes even more [editor’s note – same lead time applies to print magazines, too]. You know that “song of the summer” “Blurred Lines”? It was actually recorded in August 2012. True. It’s also true that holiday music is produced very early. Music publishers and licensors refer to it as “Christmas in July” because we see briefs for placements that early. But, here’s the trick: fresh holiday music is needed by the shit ton, every year, and it doesn’t matter how big of an artist you are to get played. Read that sentence again. It does not matter how big your Twitter account is, whether you’ve sold 100,000 records, or even whether you’ve toured yet; your music has just as good a shot as anyone else’s. Specialty shows, local terrestrial radio, college stations, streamers, ad companies, brand agencies: they all need new holiday music. They need it in freaky indie form, as traditional covers, and cheeky originals; they need it all. And sometimes, they need it very quickly to replace older holiday music.

Bear in mind, at least two Christmas albums will be released on October 29th this year, one from Duck Dynasty featuring George Strait, and another from Restless Heart. They will be out as of this article’s publication! You’re already too late for a big release. But, you probably have gigs in November and December booked, right? Surely you must know a few Christmas covers for those high paying gigs, right? So, record them in rehearsal, or at an early show this month. A studio recording would be nice, but not necessary here. Here’s the plan and your mission, should you accept it. Three songs, everywhere online for stream and sale, and picked up on radio. SONGS Lyrics are the game. There are orchestras and plenty of Kenny G-types taking care of the instrumental music. Focus on words. People listen to words during the holidays. Perhaps more importantly, Program Directors and Producers will be hearing thousands of these, so the lyrics you write (or the covers you choose) will make you stand out, for better or worse. COVERS These popular holiday songs are verified Public Domain, you do not need a license to record, release, and sell them: Deck The Halls; The First Noel; Hark! The Herald Angels Sing; Jingle Bells; Joy To The World; O, Come All Ye Faithful; Silent Night; The Twelve Days of Christmas; We Wish You A Merry Christmas. If you really want to do a cover of Silver

THE PLAN: 9 STEP UNDER $50 1. Pick two holiday covers, and write one original song. Rehearse them. 3. Get a Dropbox. License any cover you need to at Harry Fox, or let Limelight do it for you (http://songclearance.com). 2. Record them (live, at rehearsal, at home). Take a few photos of ornaments, band in Santa hats, ugly sweaters, etc. 4. Rip the songs down and tag them: Christmas, (subgenre like “Rock”), holiday, seasonal, etc. Have a high quality .wav, a 128 and 256 (kbps) Mp3 or AAC version ready to go. 6. Go to http://distrokid.com - pay $19.99/ year, and put all of your new holiday recordings on iTunes, Google Play, Spotify, etc. (use those photos) 7. Make a simple YouTube lyric or photo video (or real video if you have more time and money). 8. Get some CD-Rs with thin cases for $9.99. Do not use sticky labels. No need to get them printed if you’re not releasing them commercially. Some radio stations will still want you to actually send a disc. Don’t go crazy; send what you have if they ask. Mostly send .wav links. 9. Local specialty shows usually are on Sunday nights, so submit to them first. Get your links (or mailers) to the other stations next. Hit the assistant PDs. Happy holidays! Go get ’em! NOVEMBER 2013 PERFORMER MAGAZINE 45