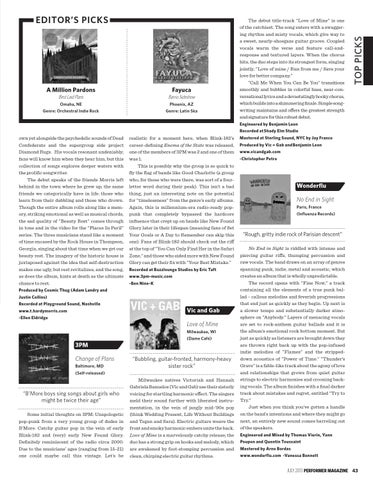 The debut title-track “Love of Mine” is one of the catchiest. The song enters with a swaggering rhythm and misty vocals, which give way to a sweet, nearly-shoegaze guitar groove. Coupled vocals warm the verse and feature call-andresponse and textured layers. When the chorus hits, the duo steps into its strongest form, singing jointly, “Love of mine / Run from me / Save your love for better company.” “Call Me When You Can Be You” transitions smoothly and bubbles in colorful hues, near-conversational lyrics and a devastatingly hooky chorus, which builds into a shimmering finale. Simple songwriting maintains and offers the greatest strength and signature for this robust debut.

own yet alongside the psychedelic sounds of Dead Confederate and the supergroup side project Diamond Rugs. His vocals resonant undeniably; fans will know him when they hear him, but this collection of songs explores deeper waters with the prolific songwriter. The debut speaks of the friends Morris left behind in the town where he grew up; the same friends we categorically have in life: those who learn from their dabbling and those who drown. Though the entire album rolls along like a memory, striking emotional as well as musical chords, the sad quality of “Beauty Rest” comes through in tone and in the video for the “Places In Peril” series. The three musicians stand like a moment of time encased by the Rock House in Thompson, Georgia, singing about that time when we get our beauty rest. The imagery of the historic house is juxtaposed against the idea that self-destruction makes one ugly, but rest revitalizes, and the song, as does the album, hints at death as the ultimate chance to rest.

realistic for a moment here, when Blink-182’s career-defining Enema of the State was released, one of the members of 3PM was 2 and one of them was 1. This is possibly why the group is so quick to fly the flag of bands like Good Charlotte (a group who, for those who were there, was sort of a fourletter word during their peak). This isn’t a bad thing, just an interesting note on the potential for “timelessness” from the genre’s early albums. Again, this is millennium-era radio-ready poppunk that completely bypassed the hardcore influence that crept up on bands like New Found Glory later in their lifespan (meaning fans of Set Your Goals or A Day to Remember can skip this one). Fans of Blink-182 should check out the riff at the top of “You Can Only Find Her in the Safari Zone,” and those who sided more with New Found Glory can get their fix with “Your Best Mistake.” Recorded at Buzzlounge Studios by Eric Taft www.3pm-music.com -Ben Nine-K

“B’More boys sing songs about girls who might be twice their age” Some initial thoughts on 3PM: Unapologetic pop-punk from a very young group of dudes in B’More. Catchy guitar pop in the vein of early Blink-182 and (very) early New Found Glory. Definitely reminiscent of the radio circa 2000. Due to the musicians’ ages (ranging from 15-21) one could maybe call this vintage. Let’s be

Milwaukee natives Victoriah and Hannah Gabriela Banuelos (Vic and Gab) use their sisterly voicing for startling harmonic effect. The singers meld their sound further with liberated instrumentation, in the vein of jangly mid-’90s pop (think Wedding Present, Life Without Buildings and Tegan and Sara). Electric guitars weave the front and smoky harmonic embers unite the back. Love of Mine is a marvelously catchy release; the duo has a strong grip on hooks and melody, which are awakened by foot-stomping percussion and clean, chirping electric guitar rhythms.

“Rough, gritty indie rock of Parisian descent” No End in Sight is riddled with intense and piercing guitar riffs, thumping percussion and raw vocals. The band draws on an array of genres spanning punk, indie, metal and acoustic, which creates an album that is wholly unpredictable. The record opens with “Fine Now,” a track containing all the elements of a true punk ballad - callous melodies and feverish progressions that end just as quickly as they begin. Up next is a slower tempo and substantially darker atmosphere on “Anybody.” Layers of menacing vocals are set to rock-anthem guitar ballads and it is the album’s emotional rock bottom moment. But just as quickly as listeners are brought down they are thrown right back up with the pop-infused indie melodies of “Flames” and the strippeddown acoustics of “Power of Time.” “Thunder’s Grave” is a fable-like track about the agony of love and relationships that grows from quiet guitar strings to electric harmonies and crooning backing vocals. The album finishes with a final darker track about mistakes and regret, entitled “Try to Try.” Just when you think you’ve gotten a handle on the band’s intentions and where they might go next, an entirely new sound comes barreling out of the speakers. Engineered and Mixed by Thomas Vierin, Yann Poupon and Quentin Toussaint Mastered by Arno Bordas www.wonderflu.com -Vanessa Bennett