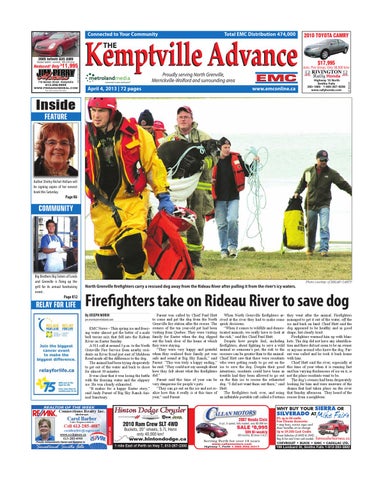 Connected to Your Community

Big Brothers Big Sisters of Leeds and Grenville is firing up the grill for its annual fundraising event . Page K12

North Grenville firefighters carry a rescued dog away from the Rideau River after pulling it from the river’s icy waters.

Firefighters take on Rideau River to save dog By JOSEPH MORIN joe.morin@metroland.com

EMC News – Thin spring ice and freezing water almost got the better of a male bull terrier mix that fell into the Rideau River on Easter Sunday. A 911 call at around 3 p.m. to the North Grenville Fire Service from nearby residents on River Road just east of Muldoon Road made all the difference to the dog. The animal had been trying desperately to get out of the water and back to shore for almost 30 minutes. It was clear that it was losing the battle with the freezing water and the slippery ice. He was clearly exhausted. “It makes for a happy Easter story,” said Andy Parent of Big Sky Ranch Animal Sanctuary.

Parent was called by Chief Paul Hutt to come and get the dog from the North Grenville fire station after the rescue. The owners of the ten year-old pet had been visiting from Quebec. They were visiting family for Easter when the dog slipped out the back door of the home at which they were staying. “They were very happy and grateful when they realized their family pet was safe and sound at Big Sky Ranch,” said Parent. ”This was truly a happy ending,” he said. “They could not say enough about how they felt about what the firefighters did.” Parent said this time of year can be very dangerous for people’s pets. “They can go out on the ice and not realize how thin it really is at this time of year,” said Parent.

When North Grenville firefighters arrived at the river they had to make some quick decisions. “When it comes to wildlife and domesticated animals, we really have to look at the risk,” said fire Chief Paul Hutt. Despite how people feel, including firefighters, about fighting to save a wild animal or someone’s pet, the risk to the rescuers can be greater than to the animal. Chief Hutt saw that there were residents who were getting ready to go out on the ice to save the dog. Despite their good intentions, residents could have been in trouble had they been allowed to go out on the thin ice to rescue the exhausted dog. “I did not want them out there,” said Hutt. The firefighters took over, and using an inflatable portable raft called a Fortuna

REALTOR OF THE WEEK

they went after the animal. Firefighters managed to get it out of the water, off the ice and back on land. Chief Hutt said the dog appeared to be healthy and in good shape, but clearly tired. Firefighters warmed him up with blankets. The dog did not have any identification and there did not seem to be an owner or anyone around who knew the dog. Parent was called and he took it back home with him. Chief Hutt said the river, especially at this time of year when it is running fast and has varying thicknesses of ice on it, is not the place residents want to be. The dog’s owners had been desperately looking for him and were unaware of the drama that had taken place on the river that Sunday afternoon. They heard of the rescue from a neighbour.

Serving Perth for over 18 years