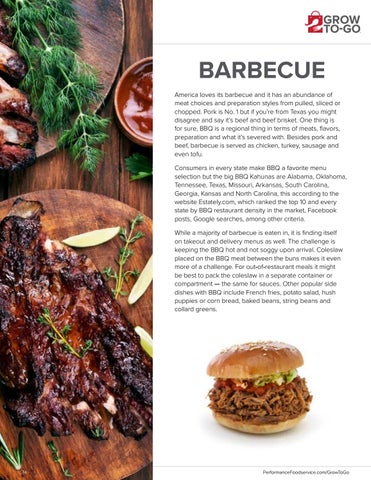 BARBECUE America loves its barbecue and it has an abundance of meat choices and preparation styles from pulled, sliced or chopped. Pork is No. 1 but if you’re from Texas you might disagree and say it’s beef and beef brisket. One thing is for sure, BBQ is a regional thing in terms of meats, flavors, preparation and what it’s severed with. Besides pork and beef, barbecue is served as chicken, turkey, sausage and even tofu. Consumers in every state make BBQ a favorite menu selection but the big BBQ Kahunas are Alabama, Oklahoma, Tennessee, Texas, Missouri, Arkansas, South Carolina, Georgia, Kansas and North Carolina, this according to the website Estately.com, which ranked the top 10 and every state by BBQ restaurant density in the market, Facebook posts, Google searches, among other criteria. While a majority of barbecue is eaten in, it is finding itself on takeout and delivery menus as well. The challenge is keeping the BBQ hot and not soggy upon arrival. Coleslaw placed on the BBQ meat between the buns makes it even more of a challenge. For out-of-restaurant meals it might be best to pack the coleslaw in a separate container or compartment — the same for sauces. Other popular side dishes with BBQ include French fries, potato salad, hush puppies or corn bread, baked beans, string beans and collard greens. 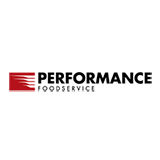